how much do you drink in a normal week?

His reaction to the bloke's first reading of the line's brilliant.

version said:
I was reading about Oliver Reed the other night. Legendary drinker.
Click to expand...

Yeah, he died in The Pub in Malta. I went there shortly after and they were giving these out - like mass cards but with bad pub wit on the back ("When you lie, let it be by a pretty lady...when you steal, steal away from bad company", yadda yadda) 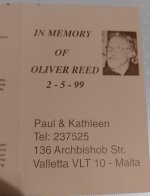 I actually never knew that Reed died doing what he loved* (or just after doing it and as a direct result of doing it). With this bit

After beating five much younger Royal Navy sailors at arm-wrestling, Reed suddenly collapsed, dying while en route to hospital in an ambulance. He was 61 years old.
Click to expand...

I trust that we are all reading that as him having five sailors desperately trying and failing to fight his one ancient but seemingly still vigorous arm - while he no doubt downed drink after drink with the other.


*Though really does anyone actually like drinking contests? There is nothing I hate more than being forced to drink beyond what I would freely choose to, especially being forced to drink way way beyond, it's horrible. The number of times that I have participated has been absolutely minimal and if I really have to do it then I do everything in my power to arrange things so I am against some total lightweight who will be horribly sick if not unconscious very quickly.
One time visiting my girlfriend's .family in Russia there was a weird incident where there a fair few people there for a family dinner and the husband of a distant cousin or something got really over excited cos I was foreign (a relative rarity in the Urals) and forced me to match him drink for drink (vodka of course) in front of the whole immediate family, most of whom were embarrassed but basically did nothing to stop it happening.. although luckily girlfriend's dad DID point out that he kept doing a pretend drink and refill several times after I actually downed mine. Turns out he was pretty lightweight thank fuck but ultimately I was saved by his mortified wife (that he kept referring to as "my Baba" which I understand in those circumstances was pretty disrespectful) dragging him out of the dinner... he was last seen staggering out on to the stairs saying "Say goodbye to the American for me".