Oh I dunno, I think he looks like a pretty fun sort of guy.

Traditionally, university policies regulating student behavior have been closely associated with in loco parentis, or “in the place of a parent.” The doctrine holds that having taken students away from the home—the natural locucs of moral development—the university inherits the ethical responsibilities of the parent....

With this historical perspective in mind, Yale’s campus turmoil reveals two sets of awkward allies across the last half century of university politics. In articulating a skeptical critique of university power and in denouncing administrators’ right to uphold norms of conduct, the radicals of the ’60s... find themselves the intellectual bedfellows of contemporary campus conservatives. And in demanding that administrators do more to promote a holistic account of student welfare and in calling for clearer moral guidance from the university about how students should responsibly interact with their peers and with society at large, today’s student activists use language that would have been intensely familiar to mid-twentieth century conservative defenders of in loco parentis.

Having all but abandoned their radical skepticism toward the controlling power of mass social judgment and the implicit power of entrenched hierarchical elites, today’s campus activists are quite explicit in their appeal not to demolish the power of administrators, but to expand it.... Each of the remedies called for at Yale and elsewhere is symptomatic of a new-found faith in university administrators as responsible guardians of social justice and as legitimate moral authorities.

Nowhere is the call for a restoration of in loco parentis more clearly seen than in debates over the proper purpose of the residential college. Student activists have rejected the charge that they are hostile to intellectual freedom and free speech by pointing to the language Yale herself uses in describing the residential college system—language that is itself a relic of an older campus commitment to students’ moral development.... [T]he colleges’ central purpose is to nurture and support students as they grow and develop.
Click to expand...

Well, it's overt, isn't it? A sizable stretch of that Dark Enlightenment piece was spent constructing a sophisticated defense of John Derbyshire's 'The Talk: Non-black Version'.
J

Camille Paglia makes this argument with characteristic aplomb. Starts at the 2 min mark:

This is Stockholm syndrome in action Where has this money gone?

Interestingly, increased spending has not been going into the pockets of the typical professor. Salaries of full-time faculty members are, on average, barely higher than they were in 1970. Moreover, while 45 years ago 78 percent of college and university professors were full time, today half of postsecondary faculty members are lower-paid part-time employees, meaning that the average salaries of the people who do the teaching in American higher education are actually quite a bit lower than they were in 1970.

By contrast, a major factor driving increasing costs is the constant expansion of university administration. According to the Department of Education data, administrative positions at colleges and universities grew by 60 percent between 1993 and 2009, which Bloomberg reported was 10 times the rate of growth of tenured faculty positions.

Leftist radical students are demanding increased powers for an administrative class whose salaries are driving them into poverty.
Last edited: Feb 15, 2017
L

what on earth are all these additional administrators doing?
J

Hard to say, but they are everywhere... 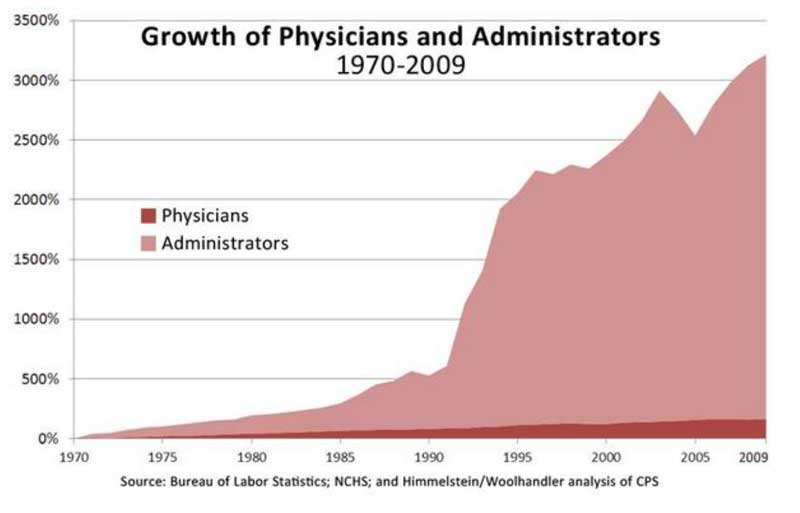 I worry that people don’t appreciate how weird this is. I didn’t appreciate it for a long time. I guess I just figured that Grandpa used to talk about how back in his day movie tickets only cost a nickel; that was just the way of the world. But all of the numbers above are inflation-adjusted. These things have dectupled in cost even after you adjust for movies costing a nickel in Grandpa’s day....

And this is especially strange because we expect that improving technology and globalization ought to cut costs....

But things like college and health care have still had their prices dectuple. Patients can now schedule their appointments online; doctors can send prescriptions through the fax, pharmacies can keep track of medication histories on centralized computer systems that interface with the cloud, nurses get automatic reminders when they’re giving two drugs with a potential interaction, insurance companies accept payment through credit cards....

It’s actually even worse than this, because we take so many opportunities to save money that were unavailable in past generations. Underpaid foreign nurses immigrate to America and work for a song. Doctors’ notes are sent to India overnight where they’re transcribed by sweatshop-style labor for pennies an hour. Medical equipment gets manufactured in goodness-only-knows which obscure Third World country....

And it’s actually even worse than this. A lot of these services have decreased in quality, presumably as an attempt to cut costs even further....
Click to expand...

Leo said:
what on earth are all these additional administrators doing?
Click to expand...

Sounds like it's time for vimothy to bust out Whatsisface's Iron Law Of Bureaucracy.
L

good thing salaries have kept pace with all these increases!

Mr. Tea said:
Sounds like it's time for vimothy to bust out Whatsisface's Iron Law Of Bureaucracy.
Click to expand...

Leo said:
what on earth are all these additional administrators doing?
Click to expand...

Possibly got something to do with all the diversity/inclusion/safe space/anti-discrimination/micro aggression guidance etc thing.
L

firefinga said:
Possibly got something to do with all the diversity/inclusion/safe space/anti-discrimination/micro aggression guidance etc thing.
Click to expand...

And the antinomy of Leftist reason -

...But Gerry already had a living wage-- he spent it on the University of Chicago, 41 years of food stamps in 4 years. If everybody knew in advance the outcome was going to be unemployment and living wages, then why doesn't Frase challenge the capitalist assumption that college is money well spent-- could have been used differently? He can't. This thought cannot occur to him, not because he is dumb, he clearly isn't, or because he is paid by a college-- money is irrelevant to him. He can't because his entire identity is built on college, academia. He is college. Take that away, he disintegrates. So in the utopia he imagines, college still exists AND people get living wages. Call me a Marxist, that's what we have now.
Click to expand...

i mean jesus christ, im tolerant with stupid peple loads of my best mates are really stupid but this is going to far
F

firefinga said:
Possibly got something to do with all the diversity/inclusion/safe space/anti-discrimination/micro aggression guidance etc thing.
Click to expand...

You are a million miles away. Why say that?

It is mostly to do with a huge increase in marketing and legal (people whose role is to stop the university being liable for things), HR, and executive assistants for senior management (as well as masses of international travel for these)

It's hardly a coincidence the costs go up in accordance with the implimentation of all those programmes - I mean this all needs infrastructure and people to get it implemented. But then, it's been considered important by many so I don't see a problem with it.
L

Why say that I assume is a rhetorical question. Firefinga is opposed to all attempts to counteract or even acknowledge racism because he says the blacks have got uppity and need to learn their place
J

I question how anti-racist these programs/politics are really, though - seems to me racism has more to do with the fact, for example, that in the US there is an industrialized police-prison complex - rather then symbolic identity politics.

... You notice these activists talks about safe spaces but they do not really create them. In fact, every space somehow becomes very dangerous, potential triggers are everywhere, everywhere, until there is no escape from them...
L

Dunno mate, when we had a discussion on safe spaces we all confessed we'd never been invited to one just read about them on snowflake twitter
L