Didn't know the camera was running? Looks as though he also didn't know what a camera is, what was going on, where he is or who he is.

Actually I think it's a kind of slurred "hellllooo everybody" rather than "I love everybody" now I listen a few times.

well articulated comment on trump on reddit imo. pretty consistent with what people here have been saying but still.

I've read this same article on reddit every month for the past 4 years. From before he was even President, the Guardian and others kept predicting Trump's downfall. Guess what? It didn't happen when he called Mexicans rapists, or attacked that federal judge, or "grab em by the pussy", or Russiagate, or when he stopped Muslims coming here, or when he attacked his own intelligence agencies. It doesn't happen. At some point the press needs to stop thinking they can predict his political demise because this is the horse that 40% of Americans want to ride and there's another 10-15% that will ride it when it's going smoothly. It's hard for the left to accept because we think that at some point reason will prevail, but if it didn't happen yet, it won't happen. We're facing something worse for us in the long run than Trump or Covid-19: we're facing the reality that this country is splitting in two along ideological lines and that might not resolve itself peacefully. I'm not seeing Civil War, but we could devolve into a state incapable of permanent governance and marred by random acts of sectarian violence. The media on the right is a propaganda outlet, but the media on the left doesn't live in reality. They don't want to ask the tough questions, accept their role in this catastrophe, or come to terms with how things really are in America. They'd rather sit in NY or London or LA and keep saying, "everything is fine. Trump is losing support!" over and over and over.
Click to expand...

Dunno though, I read that article (or the equivalent) many times... that article makes the inductive fallacy, people have been wrong before about his downfall but one time they'll be right. You'd think.

I think the Democrats may have made a terrible error by selecting Biden over Sanders.

Of course it barely raises an eyebrow these days... but the irony here

During an interview in the Oval Office, the Republican president said he did not expect the election to be a referendum on his handling of the coronavirus pandemic and added he was surprised the former vice president was doing well.

“I don’t believe the polls,” Trump said. “I believe the people of this country are smart. And I don’t think that they will put a man in who’s incompetent.”
Click to expand... 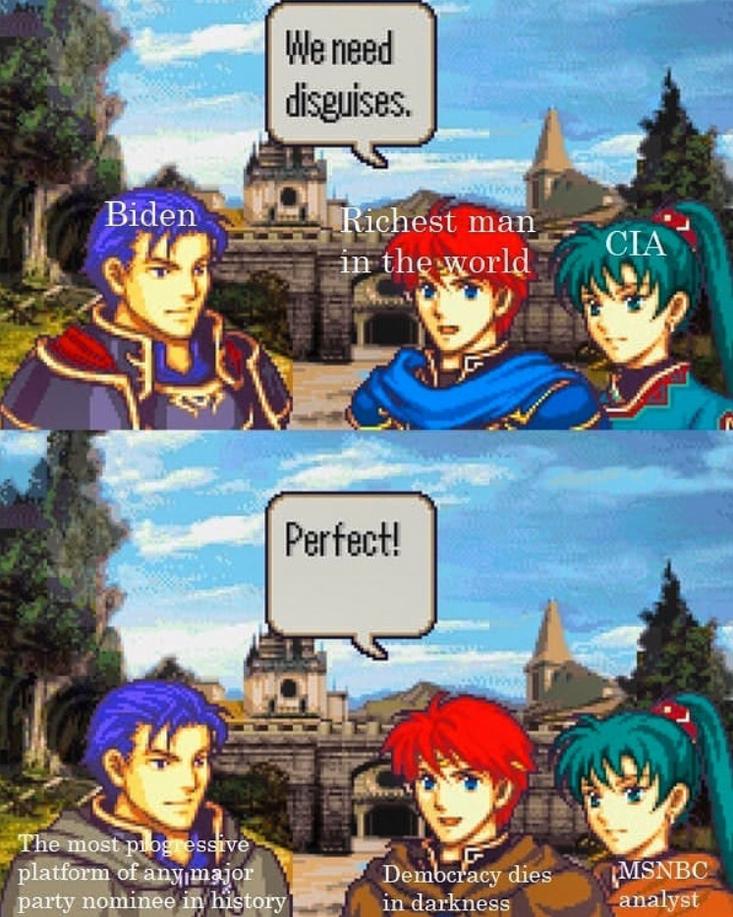 Fucking hell, they're just not even pretending to obey the law any more. I guess the thinking that everyone will be too worried about c19 or simply too dead to complain as they just completely abandon the pretence of democracy.

A lot of times people have suggested that reporters should stop him running from questions by the next reporter either repeating the unanswered question or by passing the mic back to the reporter whose question he swerved but I've never seen it done until today... and Trump just ran away...

I love how he pronounces "China". Something like "T'hynah".
L

he thinks he's emasculating them by saying it like vagina.

Reminds of this cartoon from a few years ago:

He certainly says it weirdly. Have you seen this new thing "Obamagate" - he's suddenly started saying that a) there were illegal wire-taps on Flynn (I think, it's all ab bit garbled) and b) Obama ordered them... suddenly twitter is filled with nutters going on about how soon Obama will be in handcuffs... which when you have Barr at the DOJ is probably quite likely although totally insane. But this is the lamest and most blatant made up attempt at deflection yet. It really feels as though Trump himself is going through the motions, half-heartedly making up something stupid and not even bothering to figure out what he means...

Trump also retweeted Buck Sexton, a rightwing podcaster who asserted that ?the outgoing president used his last weeks in office to target incoming officials and sabotage the new administration?. The president then added his own commentary: ?The biggest political crime in American history, by far!?
Click to expand...

A fact check by the Associated Press concluded: ?It is true that the investigation into ties between Russia and the Trump campaign, and into Russia in particular, began during the Obama administration. But it continued well into Trump?s own administration. The investigation into Flynn was taken over by a special counsel who was appointed by Rod Rosenstein, Trump?s own deputy attorney general.
?The internal FBI correspondence that has emerged in the last two weeks also doesn?t reveal ts saying that the goal of the investigation was to take down a president.?
Click to expand...

So what exact crime is Trump accusing Obama of committing?
The president himself does not seem to know. ??Obamagate?,? he ruminated in the White House rose garden on Monday. ?It?s been going on for a long time. It?s been going on from before I even got elected. And it?s a disgrace that it happened.?6
Asked by a Washington Post reporter for the second time to name Obama?s exact offence, Trump replied cryptically: ?You know what the crime is. The crime is very obvious to everybody. All you have to do is read the newspapers, except yours.?
Clear as mud, then.
Click to expand...

Sounds as if Trump hasn't really thought it out beyond BLAC MAN DUN BAD THING.
L

"President Trump said at a roundtable Monday that he's been taking the anti-malarial drug hydroxychloroquine for "about a week and a half" as a preventative measure against the coronavirus.

Why it matters: The FDA issued a warning last month that the unproven drug should only be taken in hospitals because of the risk of heart complications. There's no substantiated evidence that taking hydroxychloroquine prevents COVID-19 infections."

There's something every day.... seems like Obamagate has already been and gone with Barr saying that there won't be any charges for Obama for the whatever it was he definitely did even though there was no evidence.... apparently Barr is deep state swamp etc now and needs draining.

"After numerous discussions [Trump] and I had regarding the evidence for and against the use of hydroxycholorquine, we concluded the potential benefit from treatment outweighed the relative risks.?
Click to expand...

I think it's bullshit, trump's just trolling and trying to distract (and own the libs). bet he doesn't take it, can't imagine a germaphobe would be the type of person to risk taking questionable meds.