thats what he said, but in fewer words.
S

who're you talking about this entire thread is about cameraphones

Why Do Some Feminists Think the Bernie Sanders Inauguration Meme Is Sexist?

On Wednesday, Drexel University professor Amelia Hoover Green took to Twitter to offer her “ice cold feminist take” on the popular image, criticizing Sanders’ apparently disinterested demeanor in the photo as evidence of his failure to perform the “emotional labor” expected of women.

“Ice cold feminist take: I love Bernie, I really do, but sir: emotional labor is not beneath you. Not feeling it? Fucking pretend for one minute, like [most] women do every minute,” reads Green’s original tweet.

Others have also attempted to take a critical feminist lens to Sanders’ inauguration day outfit, with Female Persuasion’s Anne B. Kelly going as far as to declare Sanders’ mittens and parka a willful act of “misogyny,” done “purposefully to cast a shadow on women’s historic day.”
Click to expand...

If we're gonna talk Bourdieusean Distinction re: music as signal, then we gotta make obligatory nods to the "hot take" economy of political culture

suspended said:
If we're gonna talk Bourdieusean Distinction re: music as signal, then we gotta make obligatory nods to the "hot take" economy of political culture
Click to expand...

You should embrace not having a camera and get yourself a little sketch pad and do some drawings when you are out and about. Highly recommended to everyone in fact. Observational drawing is good for you idk why but it is. And post them in the drawings thread ofc.
S

Ok now all the worthwhile takes about feminism have been said, we can close the thread @sadmanbarty

suspended said:
If we're gonna talk Bourdieusean Distinction re: music as signal, then we gotta make obligatory nods to the "hot take" economy of political culture
Click to expand...

luka said:
all this stuff has always been a part of being 'into music' at least for as long as ive been alive but the forums and social media etc have foregrounded it like never before. partly because its made it impossible to be unique. the positions you have to take to differentiate yourself from basic people are now impossibly convoulted.
Click to expand...

luka said:
any opinion you can formulate has been expressed by at least 10,000 other 'indviduals' on twitter. you can search for it and find it. mortifying. does terrible things to peoples sense of self.
Click to expand...

luka said:
even if you decide to go off piste and be a North Korea admirer or a Stalin apologist. thousands of other people, just like you.

Baudrillard's simulacra frame is a little about this. When you get into high levels of simulacra, opinions aren't about the object-level domain of scrutiny, they're about expressing tribal allegiance. At especially high levels, this just becomes transparently the game.

entertainment said:
interesting points byut i think we should circle this feminism thread back towards topless photography
Click to expand...

John Eden is going to give you lot the biggest bollocking if he sees this!

Topless as in Cindy Sherman in character pose.

luka said:
John Eden is going to give you lot the biggest bollocking if he sees this!
Click to expand...

suspended said:
Feminism clearly picks up the Marxist maneuver, which is [emphasize to disempowered groups all the ways they're disempowered in order to shake up & anneal (under a new equity regime) class relations]. The long-term gambit is that half-truths and exaggerations of disempowerment are an instrumental good to this re-annealing. But in a system that's shown itself anti-fragile to agitation (it'll adjust to your complaints, but never revolutionize itself beyond the minimum required), this gambit is no longer economical, it actually hurts the very groups it purports to work on behalf of, undermining the group's identitarian self-esteem, changing their perception of the world to something much more antagonistic (or apathetic) to their plights.

To get concrete: women thinking the conviction rate on rapes is 6% or 12%, when it's really 58%, or that they make $.72 on the dollar for the same exact job, or that 1 of 4 college women is sexually assaulted, does no favors to anyone except the revolutionary, who prays the stirred-up outrage and anger will come to a head. The disempowered groups are not being protected or advocated for by revolutionaries; they're being used. Their subjectively perceived conditions degrade as the statistics grow ever-grimmer, and with it tanks their sense of security and value—which allows them eventually to dehumanize other identitarian groups, a precondition for wheeling out the guillotines.
Click to expand...

Anyone know anyone that writes on feminism and dialectics?
S

DLaurent said:
Anyone know anyone that writes on feminism and dialectics?
Click to expand... 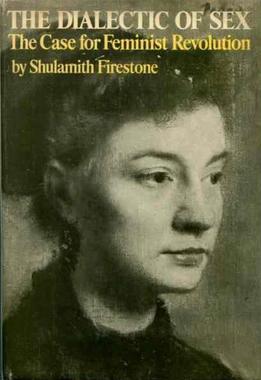 The Dialectic of Sex - Wikipedia

en.wikipedia.org
(there are a lot of people tho, just check google scholar search)

The Dialectic of Sex - Wikipedia

en.wikipedia.org
(there are a lot of people tho, just check google scholar search)
Click to expand...

Sounds interesting from the wikipedia page. Sounds like a dialectical version of Dworkin. Which is about as far as I've read so far. Quite an old one but looks worth a read. I think there's a Fifth Wave Dialectic going on at the moment. That's what I'd write about but it's difficult for me to express in the midst of the current zeitgeist.