And so many more. Also, have to agree with the new title. Been saying the same for years.
Click to expand...

That Striders World tune is immense, named after the same game Tinchy Stryder got his name from I presume?

On a soundsystem its a whole other thing, too. No idea about tinchy?
P

pattycakes_ said:
On a soundsystem its a whole other thing, too. No idea about tinchy?
Click to expand...

He got his name from this game on the mega drive https://en.wikipedia.org/wiki/Strider_(video_game) pretty sure it's the same one that's in that music video. Just a vaguely interesting coincidence

Ah then that's it for sure, omar is a total vg nerd
C

All the detroit ones are nutters, that's the standard set by the three and mad mike etc. but yeah, cheers for those tunes, the strider one is great, very grimy actually.

In my completely unscientific poll of all the places I've seen everyone talking about OS cos of the RA thing lately it's Strider's World at number one for most liked.
C

I mean, you gotta take your hat off

name as much as the track


Could third be convinced by this one?

It's quite a basic sound, but one that I feel would really bang out on a good system in a dark club. Cos he's got that crispness and confidence in his beats, no fucking about waffling
C

Does he have anything notable with (preferably his own) vocals? I will deffo investigate further on my own but pleased post if there's something obvious
C

You gotta applaud someone who makes their own site to sell. Like obviously bandcamp is doing the Lords work, but I hate how it pushes everyone into the same format.
C

AFAIK he doesn't do vox

Back when Theo Parrish used to have his monthly residency at Plastic People I spotted AOS in his trademark bucket hat lurking in the shadows of the little enclave behind the dj booth. Went over and had a chat. Sweet guy, really funny. Asked him what he was doing in town, he said he was playing XOYO in an hour or two. I was like whaaa?! had no idea. Told him I'll head up there and try to get in... Get there and its sold out. Totally gutted. Wasn't going to be allowed back in to plastics so the night was done. Loitered for 15min anyway for the fuck of it and spotted Omar and Kyle Hall coming up the street. They saw me and said what's up. I told em it was sold out, looking all glum. Omar goes 'don't worry man, I got you.' He introduces himself to the bouncer and as him n Kyle went through he turned and said 'come on then' with a grin. Went back stage, drank a few beers, had a chat with Kyle about Detroit's scene. Probably coming across a bit too eager, but I was so hyped. Anyway, it's time for Omar's set and he plays a barnstormer, choc full of double deep, obscure NJ garage, a few 90s classics, his own grimey shit and then at a couple of choice moments, the most transcendent vocal house that to this day I have no idea what any of it was, but there was this one track where it had one of those irresistible vocals that makes you go all gooey, dropped in right after some crazy headmasher that just lifted everyone up. The room erupted and he turns around with a sheepish grin, we both smiled at each other and high fived. Top night. 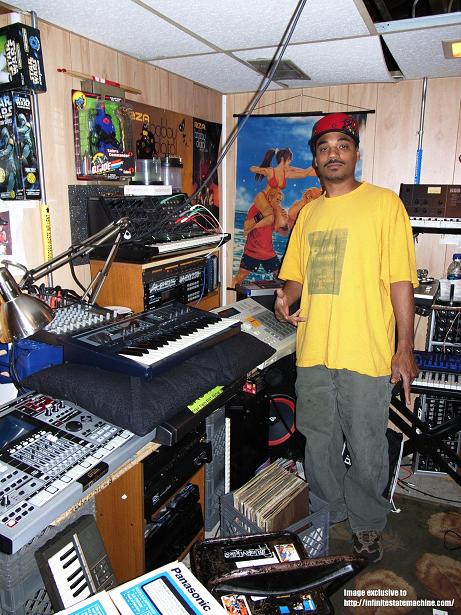 A Conversation with Omar-S • InfiniteStateMachine

Alex “Omar-S” Smith has been dropping bombs on his own label FXHE out of Detroit since 2001. We had a chat with him while he was driving around with his family on a Sunday afternoon. For those familiar with his fresh sound that mixes Chicago’s jacking house rhythms with Detroit’s sublime...

That kyle hall ep on hyperdub was really good i remember, ive not really checked him since.
C

Yeah you feel with omar s that theres a whole lot there, some dimensions
C

A Conversation with Omar-S • InfiniteStateMachine

Alex “Omar-S” Smith has been dropping bombs on his own label FXHE out of Detroit since 2001. We had a chat with him while he was driving around with his family on a Sunday afternoon. For those familiar with his fresh sound that mixes Chicago’s jacking house rhythms with Detroit’s sublime...

Good hate inspiration in the comments

Hater says:
August 9, 2007 at 5:39 am
This guy is too ghetto and should learn not to Disrespect such legends as kerri chandler who OWN his ass Production wise and technical wise even more!!!!
HE is definately doin Ghetto dance music and not house music …
I cant believe this dude !! such a CUNT , a real MUDDAFUCKAAAAAAAAAAAAAAAAAAAA
Lol he aint no genius… just he is way to ARROGANT because BALL SUCKERS in Europe worship him as a good so he thinks he is the shit…
This dude is on the black list of dance music for sure..
lol he thinks he is dope lol get a brain
You must log in or register to reply here.
Share:
Facebook Twitter Reddit Pinterest Tumblr WhatsApp Email Link
Top