Did any great writers come out the NME in the 90s/00s? Or was it a busted flush by then?

No, they were all cunts on the NME in the 1990s. It was the aftermath of the Stuart Maconie coup.

I guess you could make a case for Steven Wells.

I love this idea of music writers waging war against each other BITD - Lester Bangs slags off Tony Parsons in some article or other, for example.

Sure this still goes on with bloggers slagging each other off. In fact I know it does.

craner said:
No, they were all cunts on the NME in the 1990s. It was the aftermath of the Stuart Maconie coup.
Click to expand...

Do you think the sort of writers the NME (and other popular music press organs) hired had a direct effect on what music became popular? Or were they just responding to what "the people" were into?

Nowadays it seems slightly ludicrous to imagine that critics could influence the state of the music scene, but maybe it isn't so fanciful - surely Pitchfork has a big influence on the popularity of artists? And Anthony Fantano is pretty popular, too.

Didn't realise this existed, could be useful

I don't know, a lot of those NME writers of the early 90s were associated with the chortling Wonder Stuff crap, I guess.

There was a dynamic between NME and MM in the early/mid 90s whereby MM would 'break' or cover bands early on (see the 1992 'Best New Band in Britain' Suede cover before they'd even released a record) and the NME would take over the push once success had been established.

Also, MM was much more in the tradition of the old iconoclastic NME epoch, raves and assassinations and writers unafraid to be pretentious (although this was actually only a small cohort of MM writers, in reality). They also undoubtedly covered more new music (or at least Simon did) and would be unafraid to boost traditions outside rock. I still have a copy of a May 1994 edition which had 2-Unlimited on the cover and contained a family tree compiled by Peter Paphides and Simon Price tracing the roots of Eurodance from Hi-NRG, Disco, Philly Soul and Kraftwerk. This was expert trolling of a predominantly indie kid readership and I lapped it all up (and learnt things). Simon Reynolds would stuff his singles reviews full of jungle releases and make E-Z Rollers single of the week when even the music magazines were pretending this music didn't exist. Meanwhile, at NME you had Stuart Maconie, Andrew Collins, Johnny Cigarettes, etc smirking away about Sleeper or something, gearing up to be vox pops on 'I Love the 1970s' or Radio 6 DJs.

I don't fight, I run away

catalog said:
I've only read those 'ardkore pieces, which were brilliant, but i've not read any of his books. i think cos he posts here regularly, i just think of him as part of the furniture, not so special. but i should read one of the books. I massively appreciate his posts and general knowledge tho. he made a post about how to write which was good - about how reaching for something in the text is what its about.

the archive is HUGE tho - where to start?? what is the reynolds canon?
Click to expand...

I'm certainly a Reynolds fan (though not an uncritical one).

The canon probably starts with Energy Flash, which is the book on dance culture - in my opinion anyway.

Similarly, Rip It Up for post punk – to which Totally Wired (interviews) is definitely worth adding.

I liked Retromania too, especially the essay Lost in the Shuffle on record collecting.

Shock and Awe (on glam rock) is still in my to read pile. I expect to like that too.

I was less impressed with Bring the Noise (old reviews and stuff); it struck me as juvenilia and hence not so well written.

Avoid The Sex Revolts, which is just dreadful.

Blissed Out I know nothing about.

Is Stuart Maconie a renowned bellend?

subvert, are you 'Jonathan'

I don't fight, I run away

Corpsey said:
subvert, are you 'Jonathan'

Ah, yes. I'd forgotten I'd written that. I stand by every word

I actually took a Stanley knife to the book, so that my copy is just pages 229-384 (plus the index). The rest did go in the bin.
C

NME in 94 would never have done this. Would not have had the imagination, wit or guts. 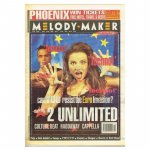 Corpsey said:
Did any great writers come out the NME in the 90s/00s? Or was it a busted flush by then?
Click to expand...

Paul Lester and David Bennum were underappreciated MM writers from this period.

NME had fucking Stuart Maconie, chortling, palling about with Blur.

I loved this paper in my teens, I got so much from it.
C

i read the NME religiously in the library as a teenager, so i guess mid 90s, they didnt have melody maker. it was all the stuff at the back i looked at most, the charts, singles reviews, cant say any of the articles stood out much. although i do remember jonny cigarettes, for the name it was mostly just if something was in there, it mattered?
You must log in or register to reply here.
Share:
Facebook Twitter Reddit Pinterest Tumblr WhatsApp Email Share Link
Top