exploits of woops while homeless

this thread will be a brief account of some of the stuff i got up to while homeless in london in 2014.

at the end of 2013, not for the first time, i found myself broke and sofa surfing with many supportive friends including @DannyL and @IdleRich of this forum, but eventually i ran out of places or patience. one night i walked down towards the city with a friend of mine who was big into "urbex" (exploring abandoned or prohibited urban spaces) and he helped me find a gas room under a pavement in the lightwell outside a building which was awaiting renovation. this was where i slept for the next 6 months. not long after i got a duvet in there to sleep in and eventually found a sleeping bag round the corner on old st.

after a couple of nights in there i was up before dawn and ran into @luka who was on his way to run a coffee stall two minutes round the corner from my basement, so for a while my routine was to wake up, climb out, check the city clock on the square, and walk round to luke's stall, if he was working, where he'd give me a load of coffee and pastries, and could even let me use the shower in the building his stall was attached to so that was a stroke of luck.

then i'd usually go to barbican library, check my e-mail and get on with the day

i've always had a knack for finding things on the street. i found a 6 month travel card which costs hundreds of pounds but never got cancelled which i used to travel around the city for a couple of months before leaving it on a train. sometimes i'd ride bus or tube just for something to do. i also expanded my collection of library cards as detailed elsewhere on this forum

i also used to collect fag butts off the street and re-roll them to smoke, which i'd done many times before out of poverty. this is called "international mix" according to a tv program i saw as a kid.

anyway certainly i was lucky in some ways and had a lot of friendly help from many kind people, i'm very grateful to them all.

huge parts of every day especially the afternoon were spent acquainting myself with the streets of the square mile and the west end, partly to vary my environment (see part 2 below) and partly to keep myself active and stimulated etc
Last edited: Oct 6, 2020

while still sofa surfing i found myself at westfield stratford shopping centre one sunday before anything really opened and at mcdonald's fell into conversation with a very polite, well-spoken lithuanian man. eventually he told me one of his hobbies, since young, was taking small things from shops, and i told him i could probably learn a thing or two from him. so we spent the whole day nicking stuff. "trust your instinct" was the first thing he told me.

after getting some lunch we went over to the other shopping centre and nicked a load of tinfoil then went off to a secluded spot nearby where he lined his bag with the tinfoil. (on the way a car passed and he said the driver looked like security. "why?" "he's bald.") back to westfield and he nicked some trousers with the tag still on - the tinfoil stops the security gate detecting the tag.

eventually he got some headphones and sold them and bought some smack off a much rougher lithuanian guy on the other side of the shopping centre. later he decided that was enough for the day as security might be getting suspicious and told me he was off to read the bible so i said goodbye and never saw him again after that

having learned from such a master i put the lessons to good use over the 6 months in the basement and at my peak i was committing 10 such crimes per day, food, socks, books, pens and a little analog synth, plus many bottles of red wine - sometimes i'd drink one in the basement and go out and get another if it wasn't enough.
Last edited: Oct 6, 2020

it occurred to me early on that if i was going to live a vagabond lifestyle under a pavement then i might as well start worshipping the devil, especially when i found a soft toy angel somewhere around the square mile, so i turned the bin in my basement into an altar with a red-handled penknife i'd also found in a gutter, a red pen, a capful of red wine, red candles, and so on. over a number of days i dismembered the toy and covered it in wine and ink and candle wax, then distributed parts of it around the city.

over the weeks i found two more toy angels (one cardboard and one from a christmas tree) and committed similar outrages on my altar. eventually i had described a pentacle over london with sacrificial angel bits, like from hell. the 5 points of the pentacle, for your reference, were
if you're fearing for my sanity please be assured i did not believe i would summon or commune with anything supernatural. it was more an exploration of the practice and also a way of structuring my slightly aimless days. nor did i despair at any point throughout the 6 months i am describing.

@luka did speculate that this activity had summoned him that morning though. thanks to him i had my first DMT experiences, first in my basement and the second in front of william blake's gravestone in bunhill fields 2 minutes from the basement

i egged him on to nick that syth. that was my contribution. you should nick it i said.

in the last house i'd lived in before the above i'd recorded a load of concrete type sounds and music and submitted them to the alien jams label for their first release, so while living the above lifestyle my album, parallel lines converge, was released as a vinyl lp. somehow i had a couple of music bits with me in the basement, i really don't remember how, so i could launch the lp at the waiting rooms in stoke newington, i also travelled to paris and played a concert there somehow then returned to london and went back to the basement. chloe who runs the label is also a trained salon hairdresser and gave me a free salon cut while in the basement. (hi chloe)

that reminds me, i also went to the charity crisis to get some help and one of the things they sorted me out with was a trip to a warehouse in south london where they have mountains of donated clothes like new, factory seconds or whatever, shopping trolleys full of the stuff, where i could pick out a load of new shirts and some trainers, etc, plus a great big blue coat with very wide cuffs (see part 2)

i was busy writing song lyrics and starting my novel in little notebooks i used to carry around with me, this was an almost daily activity

on top of all that i was involved / in love with a schizophrenic girl at the time who was in the royal free hospital in camden, horrible gloomy victorian building near the rimbaud/verlaine house, so i used to visit her faithfully almost every day when allowed and take her blank sketchbooks and cigarettes and so on, that's another story but after the visits i'd usually go down to st. pancras station and play one of the public pianos there for a bit. also a useful piano in devonshire square opposite liverpool street station
D

IIRC we did some crossroads magic when you were staying at mine. I recall receiving message of a bunch of old dears stood in front of The Marksman.

yep, that's correct @DannyL you inducted me into the ways of santeria, and helped me make an offering to one of the gods in the hope of finding a new home, which was a success. i forget the name of the god but thanks again

i also used to collect fag butts off the street and re-roll them to smoke, which i'd done many times before out of poverty. this is called "international mix" according to a tv program i saw as a kid.
Click to expand...

Reminds of A Confederate General From Big Sur in which they would go for "a walk into town to get some cigarettes" which meant that they would walk the 5 miles or whatever it was into town on one side of the road picking up all the butts there, and then walk back on the other side picking up the butts on that side, hopefully enough for a full pouch when they got back to the shack.
D

woops said:
yep, that's correct @DannyL you inducted me into the ways of santeria, and helped me make an offering to one of the gods in the hope of finding a new home, which was a success. i forget the name of the god but thanks again
Click to expand...

Timely this. I'm having a complex odd relationship with it atm. Helps me to recall stuff like this. 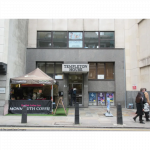 fascinating, thanks for sharing, woops.

DannyL said:
Timely this. I'm having a complex odd relationship with it atm. Helps me to recall stuff like this.
Click to expand...

your altar is/was much better than mine
D

My mate Steve had a series of altars to lots of lwa for a while in an Ikea cabient. Ghede on the bottom and IIRC Damballah at the top. It looked amazing as these things tend to when you pack 'em with artwork, candles and offerings. We used to call it "the Ikea Tower of Voodoo".

Who was that bloke who died and it was discovered he'd made some huge religious artwork/shrine in his garage and never told anyone?

James Hampton (April 8, 1909 – November 4, 1964) was an American outsider artist from Washington, D.C., who worked as a janitor and secretly built a large assemblage of religious art from scavenged materials known as the Throne of the Third Heaven of the Nations' Millennium General Assembly, currently on display at the Smithsonian American Art Museum. Art critic Robert Hughes of Time magazine wrote that the Throne "may well be the finest work of visionary religious art produced by an American."