this thread is a good trailer for my forthcoming thread on 'treeshagging' which i promise to put up later this week. I know you've all been waiting for it.

Treeshagging maybe a bit crass as a title? Might put people off?

muser said:
I guess Perineum Sunning is like the top-shelf mainlining version of grounding. 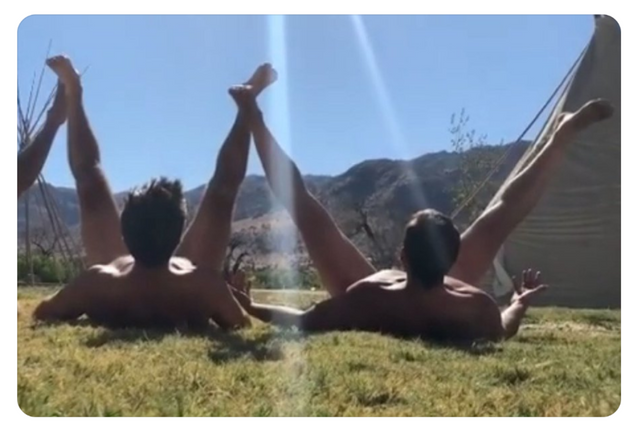 Me and Matthew teach this at our upcoming camp in Epping Forest, Loughton

luka said:
I say no meat of any of kind on pain of death
Click to expand...

Look, everyone, just renounce your wicked lives of cruelty, selfishness and violence, or @luka will dispatch his Officers of Loving Correction to brutally murder you.

i thought treeshagging was an exciting title myself and might draw people in? it's a bit like 'money' - it doesn't actually exist and is more of a thought experience than something that you necessarily actually do.

Well i pose the question to the community at large and defer to their collective judgement. Feels a bit crass to me but the younger ones may well like it
C

I've come into work today to do some tests on static-sensitive devices, so I'm wearing shoes to ensure I'm properly grounded, ironically enough.

luka said:
If you want to get to the highest levels of enlightenment you have to go vegetarian. This is non negotiable. But most people won't have the capacity to reach those levels anyway hence why in India not everyone is obliged to be vegetarian. The lower types can sate their lower appetites.
Click to expand...

you know i wonder about this actually. and i'm a committee of one as it stands. because grounding - which doesn't HAVE to have an electrical dimension to it at all - as i mentioned - it's usually thought that eating meat is grounding - and this ties in with with luke's conjecture

you know mooji has his students eat meat. i think he's onto something. they get high. all those dopamine precursors.

and it stands to reason on a philosophical level too - dead animals taking you to the astral metaphysical dimensions by ingesting them.

i think the "etheric" high people get from eating vegetables is generally malnutrition. it's the fasting high. it's the poorly-implemented vegetarian diet.

i think if you eat vegetables properly you're grounded - and i mean in the best possible way. ALIGNED.

i always think you're quite a grounded dude @luka . working outside innit. eating vegetables. that's why you can handle/need the vast quantities of psychedelics.

along a similar line of thinking india - like MUD EVERYWHERE is the most grounded place in the world. that's why their yogis have to be so extreme. use those same techniques in europe and you're OUT THERE.

My meat loving friend says it makes him feel like Conan, he says meat = lust and violence which I admit sounds fun

People I know who gave up meat just because they found the whole experience gross (ie no moral aspect to this ) associate it with feeling unclean, defiled, yucky, heavy, ponderous, slow witted

shiels said:
what's good about it? Everyone completely misunderstanding the topic and each other?
Click to expand...

What is grounding for?

Matthew is correct that I suffer from over-grounding partly due to being raised on a diet of stringent atheism and caustic cynicism.

luka said:
Matthew is correct that I suffer from over-grounding partly due to being raised on a diet of stringent atheism and caustic cynicism.
Click to expand...

Fasting and meat is the way to go, balancing satiety and hunting reflexes. I skip breakfast, then eggs or fish for lunch, sizzling haunch for dinner, red wine, read some Michael Crichton before sleep.

woops said:
it does slow down you're brain it's true which is why i eat meat every day cos otherwise my mind would expand to galactic proportions and destry the earth and dissensus
Click to expand...