Do we really want out?

Mr. Tea said:
I remember someone describing that as "like the results of an experiment to see if it's possible to live on white wine and Skittles."
Click to expand...

I'd definitely buy her a pint

Yeah but she's no Clemency Burton-Hill, is she.

Mensch waged war on a friend of a friend for no obvious reason. Went on for months and months like some senseless curse.

Probably Mandalorian did take it from that come to think of it.
T

shiels said:
but people can go without coffee and iPhones. The point is... why should it be a contradiction to desire the things that have been produced
under capitalism or benefit from its fruits while pointing out that it’s immiserating, destroying us etc
Click to expand...

silly boy. we produce them. Not only is there no contradiction there, there is not even a hypocrisy (quite the opposite) a degradation in spending to claim back the shit wot we made. The hypocrisy is going to mangal 2 in dalston and buying one of their quarter falafel pides for 7 great big heads of queen elizabeth.
T

you haven't wrestled with my point that the left is dead, instead resorting to some weird closed/open system question. First you need to have something that opposes the system, even from within itself, even if it is totally co-opted. And I do not see that opposition coming from the UK left in any shape or form. Be that the old prudes or the new home counties white breeders. cos you know they would never dirty their whiteness and shag a muslim.

Do you see any opposition within the system at all atm?
T

version said:
Do you see any opposition within the system at all atm?
Click to expand...

There are glimmers of developments, Iran... Chile, high labour militancy in China, Turkey a few years back, Sudan. In the UK, no.
T

version said:
You can go without an iPhone, you can't really go without a drink during a protest. You just go grab what's closest. If there's a Starbucks where you are then you get a Starbucks.

It's a contradiction because you're contributing to the misery and destruction whilst railing against it. This is why there doesn't appear to be an outside. Anything you try to do just feeds into it, e.g. buying a book on deforestation.
Click to expand...

“The working class must not constitute itself a political party; it must not, under any pretext, engage in political action, for to combat the state is to recognize the state: and this is contrary to eternal principles. Workers must not go on strike; for to struggle to increase one's wages or to prevent their decrease is like recognizing wages: and this is contrary to the eternal principles of the emancipation of the working class!
“If in the political struggle against the bourgeois state the workers succeed only in extracting concessions, then they are guilty of compromise; and this is contrary to eternal principles. All peaceful movements, such as those in which English and American workers have the bad habit of engaging, are therefore to be despised. Workers must not struggle to establish a legal limit to the working day, because this is to compromise with the masters, who can then only exploit them for ten or twelve hours, instead of fourteen or sixteen. They must not even exert themselves in order legally to prohibit the employment in factories of children under the age of ten, because by such means they do not bring to an end the exploitation of children over ten: they thus commit a new compromise, which stains the purity of the eternal principles.
“Workers should even less desire that, as happens in the United States of America, the state whose budget is swollen by what is taken from the working class should be obliged to give primary education to the workers' children; for primary education is not complete education. It is better that working men and working women should not be able to read or write or do sums than that they should receive education from a teacher in a school run by the state. It is far better that ignorance and a working day of sixteen hours should debase the working classes than that eternal principles should be violated.
“If the political struggle of the working class assumes violent forms and if the workers replace the dictatorship of the bourgeois class with their own revolutionary dictatorship, then they are guilty of the terrible crime of lèse-principe; for, in order to satisfy their miserable profane daily needs and to crush the resistance of the bourgeois class, they, instead of laying down their arms and abolishing the state, give to the state a revolutionary and transitory form. Workers must not even form single unions for every trade, for by so doing they perpetuate the social division of labour as they find it in bourgeois society; this division, which fragments the working class, is the true basis of their present enslavement.
“In a word, the workers should cross their arms and stop wasting time in political and economic movements. These movements can never produce anything more than short-term results. As truly religious men they should scorn daily needs and cry out with voices full of faith: "May our class be crucified, may our race perish, but let the eternal principles remain immaculate! As pious Christians they must believe the words of their pastor, despise the good things of this world and think only of going to Paradise. In place of Paradise read the social liquidation which is going to take place one day in some or other corner of the globe, no one knows how, or through whom, and the mystification is identical in all respects.
“In expectation, therefore, of this famous social liquidation, the working class must behave itself in a respectable manner, like a flock of well-fed sheep; it must leave the government in peace, fear the police, respect the law and offer itself up uncomplaining as cannon-fodder.
“In the practical life of every day, workers must be the most obedient servants of the state; but in their hearts they must protest energetically against its very existence, and give proof of their profound theoretical contempt for it by acquiring and reading literary treatises on its abolition; they must further scrupulously refrain from putting up any resistance to the capitalist regime apart from declamations on the society of the future, when this hated regime will have ceased to exist!'
Click to expand...

Well, that made for grim reading.
T

version said:
Well, that made for grim reading.
Click to expand...

how? he's taking the piss. hence the quotation marks.

These sorts of objections are nothing new. They were already old hat in the 19th century.
T

my objection to these guys is not that they go on protests - although protests are not very indicative these days but if they want to do that all their life I'm not going to complain. In fact they should buy more and more shite coffee from starbucks if it will make them realise they are not much better than their subordinates and in fact rather than saving up for good shit, they pervert any sense of aesthetics through their ruthless spending. My objection is that it's philanthropist do gooder religious nonsense. Would rather become a catholic reactionary if that was my sole aim in life. But of course that contravenes the grift.

Marx was actually a massive shitposting troll. this is why I keep advising @luka to read him. He loved to cuss out simpletons.

Like this one, on unlimited state money. just absolutely great.

"In order to balance the decrease of domestic production by means of imports, on the one side, and the increase of industrial undertakings abroad on the other side, what would have been required were not symbols of circulation which facilitate the exchange of equivalents, but these equivalents themselves; not money but capital. The losses in French domestic production, in any case, were not an equivalent for the employment of French capital abroad. Now suppose that the Bank of France did not rest on a metallic base, and that other countries were willing to accept the French currency or its capital in any form, not only in the specific form of the precious metals. Would the bank not have been equally forced to raise the terms of its discounting precisely at the moment when its ‘public’ clamoured most eagerly for its services? The notes with which it discounts the bills of exchange of this public are at present nothing more than drafts on gold and silver. In our hypothetical case, they would be drafts on the nation’s stock of products and on its directly employable labour force: the former is limited, the latter can be increased only within very positive limits and in certain amounts of time. The printing press, on the other hand, is inexhaustible and works like a stroke of magic. At the same time, while the crop failures in grain and silk enormously diminish the directly exchangeable wealth of the nation, the foreign railway and mining enterprises freeze the same exchangeable wealth in a form which creates no direct equivalent and therefore devours it, for the moment, without replacement! Thus, the directly exchangeable wealth of the nation (i.e. the wealth which can be circulated and is acceptable abroad) absolutely diminished! On the other side, an unlimited increase in bank drafts. Direct consequence: increase in the price of products, raw materials and labour. On the other side, decrease in price of bank drafts. The bank would not have increased the wealth of the nation through a stroke of magic, but would merely have undertaken a very ordinary operation to devalue its own paper. With this devaluation, a sudden paralysis of production! But no, says the Proudhonist. Our new organization of the banks would not be satisfied with the negative accomplishment of abolishing the metal basis and leaving everything else the way it was. It would also create entirely new conditions of production and circulation, and hence its intervention would take place under entirely new preconditions. Did not the introduction of our present banks, in its day, revolutionize the conditions of production?"
Click to expand...

I thought it was just some knob trying to out-radical people by being as contrarian as possible. 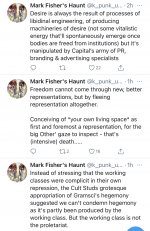