waits is easily better. whereas bowie has absolutely nothing going for himself artistically, waits at the very least is entertainingly vivid. his music reminds me of this cartoon i watched as a kid called the marvelous misadventures of flapjack. its world was very similar to the one waits inhabits: rotting sailors, cannibal shop owners, fortune telling booths, bizarre magic relics, etc. you wouldn't call it innovative, exactly, but what made it funny and memorable was its extreme commitment to the bit. guess my point is not everything has to be tasteful or even original--being able to conjure up a shared fictional world in grotesque, hilarious granular detail is a virtue in itself.

birthday party were great because of all the members. Howard, Harvey and Pew honed the sound, but Cave was essential.

"I think what I do is write adventure songs and halloween music."

this, for example, is corny, sure... but in a good way. it's funny and atmospheric. it's what musicals should be like:

But we've been over this so many times in even my short tenure on this board, zero point in re-hashing the inevitable "Neu! did his Berlin trilogy sound before he did" / "All his riffs come from black guitarist" arguments

suspended said:
The idea that Bowie has "nothing going artistically" is so insanely foreign from art and music-world consensus it's almost hard to process how it's possible
Click to expand...

wtf are you talking about??

bowie has never gotten any praise from critics.

mvuent spennt his teenage years acquiring a detailed knowledge of music criticism of the last 50 years. if anyone so much as farted near a typewriter in that time, there's a good chance he's read it.

Can I, at this point, draw attention to the remarkable restraint I have shown thus far?

jenks said:
Can I, at this point, draw attention to the remarkable restraint I have shown thus far?
Click to expand...

The reason Luke hates them both is because they used comedy voices to distract people from their outrageous theft of other people’s ideas. Isn’t it Luke?

Which one do you hate the most?

waits. bowie has one song i really love. i could never love a waits song.

luka said:
bowie has one song i really love
Click to expand...

sometimes when we are out on the piss luke will ask the bar staff to put this on. then he will sing along to every word. tears in his eyes. and collapse into my arms to the closing chords.

No, the Bowie song he truly loves is ‘Absolute Beginners’

luka said:
waits. bowie has one song i really love. i could never love a waits song.
Click to expand...

Benny B said:
Lol at luka getting tricked into liking tom waits
Click to expand... 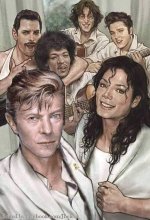 craner said:
No, the Bowie song he truly loves is ‘Absolute Beginners’
Click to expand...