jenks said:
First thing I do when I go into a European supermarket is buy one of those family bags of ready salted Lays - proper decent size, not one of these mealy mouthed Jamie Oliver approved portion.
Click to expand...

Those big bags of olive oil Lays you get in Spain are fucking emotional. We don't have them over here really

crypto-nationalist statement, banon would be proud

i've just bought (but not eaten yet) some indomie crisps.

Shop online at ASDA Groceries. The same great prices as in store, delivered to your door or click and collect from store. 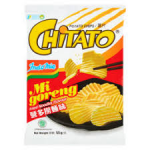 “You must be cool and like to experiment with new things, including new snacks. Ever thought of potato chips with the taste of your favorite fried noodles?

New…!!! Chitato presents a new taste, flavor Indomie Mi Goreng which is often a mainstay of your breakfast. The savory taste sensation of Indomie Mi Goreng is integrated into pieces of wavy Chitatos, providing sensational enjoyment. Hanging out and chatting with your friend is even more fun with Chitato, Life is Never Flat!”

i knew this would be coming! i was going to prempt it by saying they're nothing special!

luka said:
Tayto Castle in the Ulster countryside is where the terrific Tayto crisps are made. The castle is over 500 years old and was originally the home of the O’Hanlon clan, one of the mightiest and most powerful clans in all of Ireland.
In 1955 the castle was in need of repair and was bought by a visionary local businessman, Thomas Hutchinson.
In 1956 he had the clever idea to make a new potato product called crisps, and started making Tayto crisps creating one of the world's best loved brands of crisps and snacks.
An enduring feature of Tayto has been Mr. Tayto, the brand's lovable mascot. He's a well known and well loved face across Northern Ireland, has been all over the world promoting Tayto and has starred in many of his own advertisements.
The word spread about the terrific Tayto taste and soon all sorts of great stuff was being made.
In 1964, Tayto became one of the first companies to sell different flavours of crisps with Smoky Bacon and Prawn Cocktail being two of the most popular.
Click to expand...

martin said:
Hate Taytos with a passion but that might be due to their association with a complete and utter cunt I used to work with. Every time he went back home to his parents in NI(which was often), he would return with a pack of Taytos to 'share' in the office.

The way he talked about these substandard crisps, like they were some sort of unheralded delicacy, was unbearable. He actually beamed with pride and stared at us as we sampled them, as if we were about to undergo the Rapture.

I just remember vaguely stale crisps with a very distant cheese tang, though the 'taste' was probably just some oral placebo, cos it said 'cheese' on the packet.

Taytos to Walkers is like Space Raiders to Monster Munch. The austere protestant version.
Click to expand...

I shared a gaff with a mate circa 1997, top floor of a three floor block where the basement was the landlord’s workshop. Problem was said mate kept getting behind on his rent, which would cause the Afghani landlord to turn up unannounced querying where Leon was and where was his money etc. All the while I’m just trying to focus on Goldeneye. This rumbled on for a while until the arrears were such that things came to a head one day. The landlord offered Leon a deal. If he’d agree to a flume being run through his bedroom from the basement workshop the l’lord would write off the debt. Leon couldn’t say no.

So the floorboards get ripped up, the flume is installed and no-one thinks anymore of it for day or 2 until Leon knocked on my bedroom door one night and asked “do I smell weird?”. The lad fuckin STANK of distilled chip pan odours. Unbeknownst to us, Mr B the landlord had started making cheap 10p crisps in a basement operation that had to be illegal. A couple of nights later in the pub, Leon was at the bar and as I motioned at him to get more drinks the people either side of him were making these discreet sniffing gestures that someone closed hummed.

I grew up three blocks from a large Frito-Lay chip factory, could definitely smell it when the wind direction brought it out way.

many years later, I lived two blocks from a Maxwell House coffee factory, which gave off a wonderful coffee smell when it rained.

these are the memories that will disappear in our deindustrializing nation.

these were fine but a bit underwhelming. would rather just eat the noodles.

they're objectively bad and will make you feel bad but despite all that sometimes they are good.

Tayto are actually very good because of their very potatoness. They aren’t exceptional though and I agree the pride northern irish people have in them is unjustified

Lichen said:
I questioned the supremacy of the Tayto while being driven by an Irish pal.
He skidded to a stop in a lay by, undid his seatbelt the better to lean over and yell at me, and delivered a well-rehearsed speech on the lines of:

It is possible to have a bad pack of Taytos. Nothing terribly wrong with them. Just below par. That never happens with Walkers.

Can’t help but feel some anti Irish sentiment in Martin’s post there. A lot of tension bubbling beneath the surface

shiels said:
Can’t help but feel some anti Irish sentiment in Martin’s post there. A lot of tension bubbling beneath the surface
Click to expand...

he's literally more irish than you. he's kilburn irish. thats the most irish it gets.

growing up, we always considered them to be a bit of a joke, a fad snack. then many decades later, come to find my in-laws would lay out salt & vinegar Pringles and sherry most nights as a pre-dinner treat. life's weird in the midlands.

craner said:
I haven't had any new crisps for ages, I'm ashamed to say.
Click to expand...