what are you reading now?

@craner I sleep. I did find this for you around the time I posted that though. The most surfer-y surfer I've ever seen reviewing the book and saying surfing and surfers are the worst.

I've never heard someone saying "dude" so many times.

craner said:
I can't believe you posted that clarification at 2.23 am - don't you ever sleep?
Click to expand...

Here he is with a turtle shell on 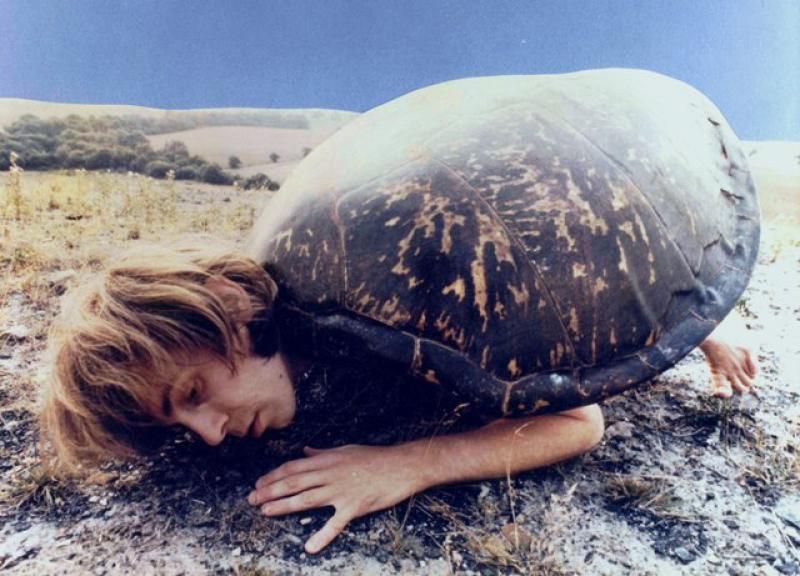 I just started The Dream of Scipio by Iain Pears, I couldn't face The Beetle Leg straight after Hopscotch, needed a kind of palate cleaner and hopefully this can do the trick.

is a historical mystery novel by Iain Pears. Published in 2002, the novel weaves together three separate narratives, each of which is set at a different pivotal moment in Western history. All three stories are tied together by a text by the fictional Roman writer Manlius Hippomanes, entitled The Dream of Scipio. This fictional text is a commentary upon the extant piece of writing produced around 53 BC by the real Roman author Cicero. Though lost to the historical record following the fall of the Roman Empire, The Dream of Scipio resurfaces twice more at key moments in European history and enters the lives of two future scholars who encounter it.
In addition to Manlius’ narrative, the novel recounts the stories of Olivier de Noyen, a poet and scholar working for the Papal Court at Avignon at the height of the Black Death in the 14th Century, and Julien Barneuve, an intellectual who works with the Vichy Government in France at the height of World War II.
Click to expand...

Looks interesting and I enjoyed his other book well enough.

IdleRich said:
I just started The Dream of Scipio by Iain Pears, I couldn't face The Beetle Leg straight after Hopscotch, needed a kind of palate cleaner and hopefully this can do the trick.

Looks interesting and I enjoyed his other book well enough.
Click to expand...

is that the bloke who wrote An Instance of the Fingerpost? One of those books i have seen recommended by loads of people but i somehow 'took against' for no good reason, so never got round to reading.

Yeah exactly, when I said "His other book" that's the one I meant even though he's written several other less feted or well known books. I enjoyed it, as I said above, well enough, although I don't think it quite merited some of the more hyperbolic praise I've seen. But you certainly shouldn't avoid it if you see it in a charity shop or something.

Last night I read the beginning of Stanislaus Joyce's book about his genius brother, "My Brother's Keeper".

There's some really funny potshots at God/Catholicism in there. Apparently he was much more fiercely anti-Catholic than James throughout his life.

A devout monster of a relative who brought up James and Stanislaus (and featured in A Portrait...) is described as living to an old age, dying, spending "Quarantine in Purgatory" before ascending to heaven to join the Angelic chorus in an endless rendition of "For He's A Jolly Good Fellow".

Looking forward to reading the rest of it, though he died having only finished half of it, not having reached the period when he moved to Trieste to accompany, financially prop up and help motivate his brother to write A Portrait and Ulysses. (They were later estranged from each other, and Stanislaus considered Finnegan's Wake a waste of James's talent, brought on by being surrounded in Paris by fawning acolytes who thought everything he did was amazing.)

"Nature, it has been said, makes no sudden start; and in a special manner, as the Proverb of Hell affirms, to create the little flower of genius is the labour of ages. The little flower is, with startling frequency, a flower of evil, springing up amid decay, the vigorous off-shoot of a withering stock."
C

Interesting reading 2pac's poetry — he clearly had a talent for it. I don't think you get much of the sentiment in them in his raps, but then I'm not a big fan of his so perhaps I've not heard the right stuff?
C

im not a fan either but i always remember that one cos i used to know a rudeboy and he told me that one, and i remember thinking how incongruous it was that he should be affected by something like that

I'll finish Round the Bend by Nevile Shute today

Unusual novel. An aircraft mechanic emerges as a prophet in the Persian Gulf of the 1950s.
C

did you finish moby dick?

catalog said:
did you finish moby dick?
Click to expand...

I did! I felt the ending was rushed, but many passages sparkled like nothing else I've read.

2pac understood, unlike most so-called "poets" these days, that poetry SHOULD RHYME.
C

HMGovt said:
I did! I felt the ending was rushed, but many passages sparkled like nothing else I've read.
Click to expand...

i sort of know what you mean about the end. it was really good but came on sudden and was then gone. my favourite character was pip.
C

Corpsey said:
2pac understood, unlike most so-called "poets" these days, that poetry SHOULD RHYME.
Click to expand...