just found this site of moscow subway stations and i thought it was too good not to share...other good stuff on the site also....

they don't have my favourite, kropotkinskaya 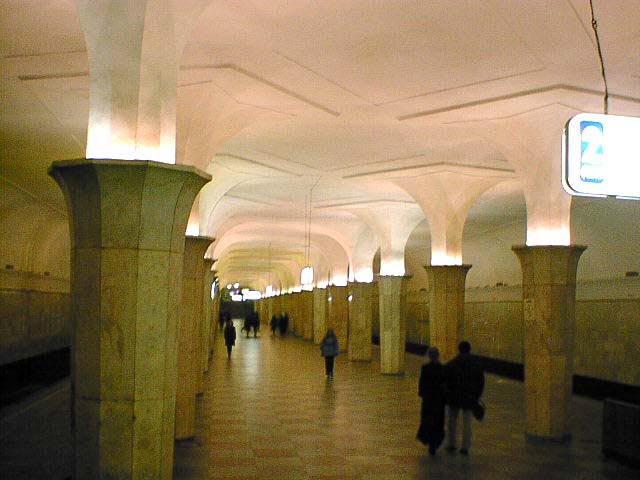 i love the idea of having a subway station called dynamo. any idea what that translates too?

adruu said:
i love the idea of having a subway station called dynamo. any idea what that translates too?
Click to expand...

i'm not sure if there's any relationship, but moscow has a hockey team called dynamo. my dad got me one of their team pins when he was over in the 80s along with some soviet regalia.
A

the -aya is the feminine adjectival ending. the word that is elided is presumably stantsiya (station) or if the name relates to a road, ulitsa - both of these are feminine. Not all stations have this sort of adjectival name though.

Dinamo is the name of a sports club - football team, hockey etc. that metro station is next to the dinamo stadium. the various teams have the best "D" ever:

there is also a casino in the shape of a pirate ship near there.

and this fiend of a brutalist building nearby:

A Londoner ought to post some pics of the ghastly, naked wired, dripping calamity of a platform at Kings X (Westbound Circle, Metropolitan? ) for comparison. It looks like the innards of a dishevelled space craft.
A

ha...to be honest, the first thing that came to my mind when i saw these was how horribly ugly nyc's subways are. the trains do run more often and pull more people, but still...the rats make the stations more interesting.
A

yeh these photos do however miraculously avoid showing the thousands of old babushkas pushing you out of the way, haggard old people selling every last piece of tat they can find in their cupboards, the unavoidable stench of sweet alcohol infused BO and leather jackets.

however, the moscow metro is a joy generally, and i still miss the smell.
D

Well, Moscow did have the advantage of being the funnel where all the wealth of the Soviet Union was directed and the metro was one of the showpieces. St. Petersburg metro is nowhere near as nice (though my memories are hazy).

Baltimore's metro is a joke, it's only one line. But it is clean and quiet.

Washington, DC has a pretty decent metro as well though the fare scheme with payment depending on your destination is really annoying.

hey i met a guy last night living in Hong Kong who says claimed to get to work via Hydrofoil from a little island where they all drive golf carts! absolutely nuts. i think he was pulling my leg.

anyways here's the site with other subway shots.
http://mic-ro.com/metro/metroart.html#reference

i love that one at the top.


one like adruu said:
hey i met a guy last night living in Hong Kong who says claimed to get to work via Hydrofoil from a little island where they all drive golf carts! absolutely nuts. i think he was pulling my leg.
Click to expand...

hahaha. i wonder how they managed to pour the bronze before it got back down again.

Along the same lines, I was linked to these fantastic pictures of the new Tokyo sewer system a little while ago...