Whale explodes over a motorscooter in Taiwan:

Heh, my work's running a squid cam at the mo... Watch the dissection of the largest complete squid specimen ever found (if I've got my facts straight!)
A

Turd on the Run

Heh, my work's running a squid cam at the mo... Watch the dissection of the largest complete squid specimen ever found (if I've got my facts straight!)
Click to expand...

I found it particularly entrancing to watch while listening to Carl Craig's Just Another Day EP.
M

Heh, getting slagged as being less exciting than paint drying in local media, but global traffic's going through the roof... the unfolding of the 450kg colossal squid is beginning...

you work there? wonderful...

not in any sense a fish, but this:

is odd enough & amphibious enough to be included

lactating reptiles with no nipples
Last edited by a moderator: May 17, 2008

one from another board for the fush (or something) massive:

Yesterday, Gawker ran what appeared to be a photo of a bloated, leathery animal corpse — only it was like no animal anyone had seen before. A stout, hairless creature with a beak, claws, and the almond-shaped eyes familiar from renderings of space aliens, it looked, in short, like a monster. Hence the headline: "Dead Monster Washes Ashore in Montauk." The photo had come over e-mail to Anna Holmes, an editor at Jezebel, from an employee at Evolutionary Media Group, in Los Angeles, who passed it on to Gawker. Because it came from a marketing company, Gawker surmised, "our guess is that it's viral marketing for something." They later pointed to a Cartoon Network show, Cryptids Are Real, which features similar-looking chubby monsters. We called Evolutionary, where a woman named Alanna Navitski, who claimed to be responsible for the tip, swore it was not a viral-marketing campaign. "This is what happened," she said.
"I got this e-mail and opened it from my girlfriend who works at Harris Publications, which has nothing to do with anything. Anyway, my girlfriend's sister was there with her friends and one of them took the picture. And we were like, 'This is the scariest shit we've ever seen.' And so — I'm in marketing — were like, 'Maybe we should send it to a few blogs and see if anyone else is as freaked out as we are.' We had no idea that it would turn into this. Now it's literally a beast of its own. But it has nothing to do with any kind of campaign."

In fact, this turned out to be true. A number of eyewitnesses say they saw the monster with their own eyes. "I saw the monster," says Michael Meehan, a 22-year-old waiter at the Surfside Inn, which sits above the beach where the monster washed up. "I just came walking down the beach and everyone was looking at it. No one knew what it was. It kind of looked like a dog, but it had this crazy-looking beak. I mean, I would freak out if something like that popped up next to me in the water."

So did anyone there, you know, do anything about it?

"This woman kept calling animal control," said Meehan. "She wanted to name it after herself. I think they came and got it. The carcass. Whatever it was."

But did they? The East Hampton branch of animal control referred Daily Intel to a supervisor who did not return calls for comment. And Navitski, of Evolutionary Media Group, says her friend's sister (who doesn't want to talk to the press, though Plum TV will host another woman, Jenna Hewitt, who claims she took a photo, tomorrow) says animal control never came. "They say an old guy came and carted it away," she said. "He said, 'I'm going to mount it on my wall.'"
Click to expand...

and another loveable little critter here:

Yea, verily, there isn't half some weird shit that lives in the sea.
Z 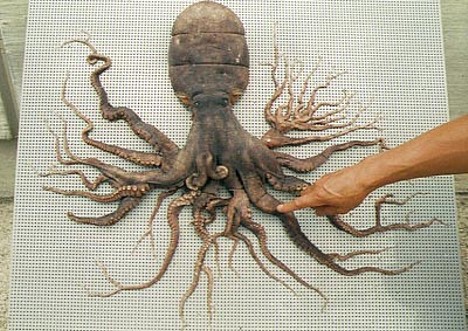 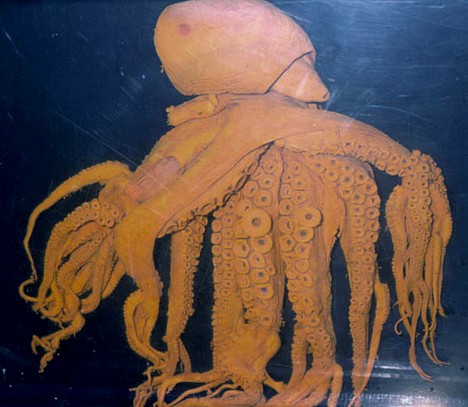 That's a fine looking creature zhao, do you have any without the octopus?

noel emits said:
That's a fine looking creature zhao, do you have any without the octopus?
Click to expand...

If only there were a global network of millions of interconnected computers, many of them stuffed to the seams with pictures of naked ladies, and a variety of user-friendly search algorithms to help you find what you want...
Z

Mr. Tea said:
If only there were a global network of millions of interconnected computers, many of them stuffed to the seams with pictures of naked ladies, and a variety of user-friendly search algorithms to help you find what you want...
Click to expand...

but noel likes THAT one. (fine taste)

zhao said:
but noel likes THAT one. (fine taste)
Click to expand...

Fair enough, can't fault him on that.

Mr. Tea said:
Fair enough, can't fault him on that.

i love that stuff. i wrote a quasi Burroughsian short story involving this once.

an old one but a good one: freakish, possibly human-eating catfish!