Such a culture delights in "experience" and in sensitivity to this experience. Consumption becomes about grain and texture. The status signaling games remain but their philosophical cover changes.
S

We will all understand ourselves and one another much better, and then we will be pummeled into a post-nuclear waste zone by China.
S

The clueless class (including that small sub-section of feminists who haven't yet realized that entering the capitalist marketplace isn't an Eden of meaning) continue performing "busyness" meanwhile drop-outs increase...

Even symbolically productivity has been repackaged itself as an 'experience' and there's an entire new milleu that glorifies productivity as a state of being, a constant feeling.

I'm all for it though, I welcome china

linebaugh said:
Even symbolically productivity has been repackaged itself as an 'experience' and there's an entire new milleu that glorifies productivity as a state of being, a constant feeling.
Click to expand...

suspended said:
We will all understand ourselves and one another much better, and then we will be pummeled into a post-nuclear waste zone by China.
Click to expand...

I sense you may be projecting a masochistic xenophilia onto your geopolitical analysis.

@suspended allocate exactly the same pointers to alcohol and push your calendar further out and further back, deaden the soul for longer with opium and with more malevolence not just your own nation’s brief tenure on Earth, look at how Brits drink and I don’t say that with any pride

we can say sensitivity with cannabis, it’s loose and unspecific but what we really mean is stress busting, you romanticise instead of seeing the pragmatic deals that sometimes have to be made with life when overwhelming horrors that have nothing to do with productivity are experienced daily

it’s like watching a mosquito flap in the toilet after it’s been slapped out of the air, bless, like reinventing the wheel
Last edited: Aug 31, 2022

linebaugh said:
I'm all for it though, I welcome china
Click to expand...

Has luka signed you up for DEATH TO AMERICA yet?

Opiate wave in the US shows a ton of folks still seek oblivion over sensitivity, whatever sensitivity means with regard to flowers and extracts

The US has pioneered mutant, ridiculous strength, low cbd (proven antipsychotic) strains before basic lab work showed it contributes to an entourage effect, balancing compounds the plant creates naturally but which have been bred out and reduced by intensive hydroponics. In this sense, the US experiment is ongoing research

If it’s an aesthetic experience you indulge in, put another way, you haven’t consumed enough - cannabis is best taken intermittently and sublingually to unlock stress and review your perspectives for breakthroughs more as a catholic/self-confession monologue of mind, eg darkness you can’t share with a partner can be carved off if you combine it with exercise

Mr. Tea said:
Has luka signed you up for DEATH TO AMERICA yet?
Click to expand...

And yet, Mr. Davis, despite his outspoken disdain for this great country, is a cutting-edge investor in US-based municipal cryptocurrency.

As his hero Prynne himself said: money speaks louder than drunk messageboard posts.

Terpenes/terpenoids have a wide range of biological and pharmacological activities, for instance, antifungal, antiviral, anticancer, anti-inflammatory, antihyperglycemic, antiparasitic, antioxidant, and antimicrobial. It is not possible to describe all pharmacological effects of terpenes/terpenoids in this paper, but we shall give just some examples for imagination of how important these compounds are in this plant. Monoterpene myrcene is the smallest terpene but the most prevalent terpene found in most varieties of cannabis. Chemotypes high in myrcene will result in a “couch lock” effect (if a sample has over 0.5% myrcene), while chemotypes with low levels of myrcene (<0.5% myrcene) will produce a more energetic high. It is simply the amount of myrcene that is in the sample that dictates how you will be affected. Myrcene is simply the important monoterpene in the plant. Myrcene has antipsychotic, antioxidant, analgesic, anti-inflammatory, sedative, muscle relaxant, and anticancerogenic properties [53-56]. The most important sesquiterpene in the cannabis plant is probably β-caryophyllene. It is a spicy terpene. This compound is the only terpene known to interact with the body’s endocannabinoid system (selectively binds to the CB2 receptor) [57]. Caryophyllene has gastroprotective, analgesic, anticancerogenic, antifungal, antibacterial, antidepressant, anti-inflammatory, antiproliferative, antioxidant, anxiolytic, analgesic, and neuroprotective effects [58, 59]. The presence of β-caryophyllene in many essential oils might contribute strongly to their antiviral ability. β-Caryophyllene displayed a high selectivity index of 140 against herpes simplex virus type 1 in vitro. The selectivity index was determined by the ratio of the cytotoxic concentration of the drug that reduced viable cell number by 50% to antiviral activity, which inhibited plaque numbers by 50% compared with the untreated control [60]. α-Pinene (antibacterial, anti-inflammatory, bronchodilator, antiseptic, and gastroprotective) and β-pinene (antiseptic) are the next important compounds [61]. It is not possible to mention here all the biodynamic terpenes. After all, there may be mentioned, for instance, limonene (antibacterial, gastroprotective, antiproliferative, antifungal, anxiolytic, antidepressant, antimicrobial, antispasmodic, or immunostimulant) [62, 63]. Linalool (sedative, antipsychotic, anticonvulsant, anxiolytic, anesthetic, antidepressant, analgesic, antiepileptic, and antineoplastic) [64], terpineol (antioxidant, antibiotic, and relaxing effect) [65], or caryophyllene oxide (analgesic, anticancer, antifungal, and anti-inflammatory) [66]. Between others are also phellandrene (antifungal and digestive disorders) [67], ocimene (antifungal) [68], camphene (cardiovascular disease) [69], guaiol (antitumor) [70, 71], α-humulene (antibacterial, anti-inflammatory, and antitumor) [72-74], γ-terpinene (analgesic, anti-inflammatory, antimicrobial, and anticancer) [75, 76], β-elemene (antitumor, antineoplastic, and anticancer) [77-80], nerolidol (antiparasitic and antileishmanial) [81, 82], or citral (antifungal, antimicrobial, antiproliferative, cytotoxic, anticancer, and antitumor) [83-90].
Click to expand... Terpenes/Terpenoids in Cannabis: Are They Important?

Cannabis sativa plant has not only cannabinoids as crucial compounds but also the other compounds that play important role as synergistic and/or entourage compound. Cannabis/hemp plant materials and essential oils were analyzed with the help of gas chromatography/mass spectrometry detector for... 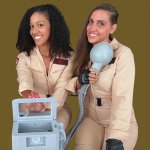 yeah the outfits
but also the whole escapade
sploofing? i had never even suspected....

Your Sesh Never Smelled So Good​

I can actually see the market for something like this, though. as more states here legalize it for personal use and dispensaries continue to open, there will be more people smoking at home. doesn't matter if you live in a house, but lots of apartment buildings here already have smoking bans for cigarettes, pipes and cigars. if this thing works, you'd probably be able to sneak a "sesh" without the neighbors knowing.