"I imagine the paranoia that Lovecraft expresses here here comes from his own problems and hangups - some Lovecraft crit has said it's all about women, all those slavering cosmic holes being vagina detenta on a cosmic scale."
Click to expand...

Guess that idea doesn't have much currency these days, I don't see how in a world where oral sex is utterly prevalent the idea of putting your dick into a toothed orifice can retain any particular fear for many people.

IdleRich said:
Guess that idea doesn't have much currency these days, I don't see how in a world where oral sex is utterly prevalent the idea of putting your dick into a toothed orifice can retain any particular fear for many people.
Click to expand... I nearly used a pic of Shane McGowan, so be grateful for small mercies.
N

How's this for cosmic pessimism? Review of H. G. Wells's Mind At The End Of Its Tether:

Wells argues in Mind at the End of its Tether that human existence is about to be extinguished. He claims that there has been a change in the conditions of the universe and that this change signals the end of being. Previously, events had a cord of logical consistency running through them; 'now it is as if that cord had vanished'. Wells searches for the correct term that can capture this nascent negative force and eventually opts for 'The Antagonist'.

Wells' viewpoints may be considered the solipsism of an unhealthy mind projecting an individual state onto the macrocosm. He acknowledges that the healthy person, with their innate gift for self-evasion, is a component of 'the normal multitude, which will carry on in this ever contracting NOW of our daily lives, quite unawake to what it is that makes so much of our existence distressful'. Faced with extinction, Wells projects his existential state beyond the parameters of his personal condition onto the whole of humanity. Wells' perturbation may be distancing him from reality, in that he believes that there has been a manifest change in the status of being. Decay has always been the symbiont of creation: what may have occurred was a realisation that the former was leading to the final contraction of his 'now'. We do not need to invoke an 'antagonist' to explain a finite life which is played out in an indifferent universe. However, it is not necessarily crude anthropocentric idealism to believe that, to all intents and purposes, the world dies with us. The death faced by Wells will be faced by us all and therefore his generalisations are appropriate. Wells muses about death and considers the nihilistic likelihood of oblivion. Wells believes that our lives are insubstantial and, a la Macbeth, signify nothing. Our loves, hates, triumphs and tragedies are enacted within the inexorable march of insentient time. Our striving is in vain - we will be forgotten.

He also cites examples of the evolution of existence and how this led to conscious human life. He describes how animals developed backbones as a result of the capricious meanderings of nature. Wells recognises the contingency of occurrences that accumulated to eventually spawn human existence. He writes about the development of primate species which gave rise to homo sapiens. There is nothing romantic or sacred about this development; it was a result of the blind, amoral and aggressive march of evolution. Wells notes: 'the little fellows faded out before the big fellows, according to the time-honoured pattern of life'.

One may presume, however, that Wells possessed these insights earlier in his life; it is only now that he documents them as a source of discomfort. There has been no change to the pattern of logical consistency, only a change in Wells apprehension of this pattern. Rational endeavour contains no intrinsic orientation towards hope, salvation or progress. Wells' outpourings may be the result of spiritual crisis when contemplating the proximity of an utterly inevitable death - rationality cannot ease this burden. Distinctive human attributes that have contributed to the development of scientific inquiry have somewhat paradoxically generated knowledge which denies human value and distinctiveness. Rationality it seems offers us 'no way out or round or through the impasse'.
Click to expand...

Anyone here read it? Struck me, from the description of it, that it might appeal to fans of Lovecraft (obviously), probably also Nietzsche, Negarestani, Houellebeqc, Bolano...heavy End Times shit.

I'm reading Joshi's new expanded HPL biog I Am Providence and just found out something pretty funny about an early story, 'The Lurking Fear'. It was serialized in a journal called Home Brew with illustrations by Lovecraft's friend, the author and artist Clark Ashton Smith. Smith was apparently a bit of a lady's man, a big drinker and all-round bon-viveur, and he decided to troll the prudish Lovecraft by making the huge gnarled trees and other vegetation mentioned in the story rather rude-looking: 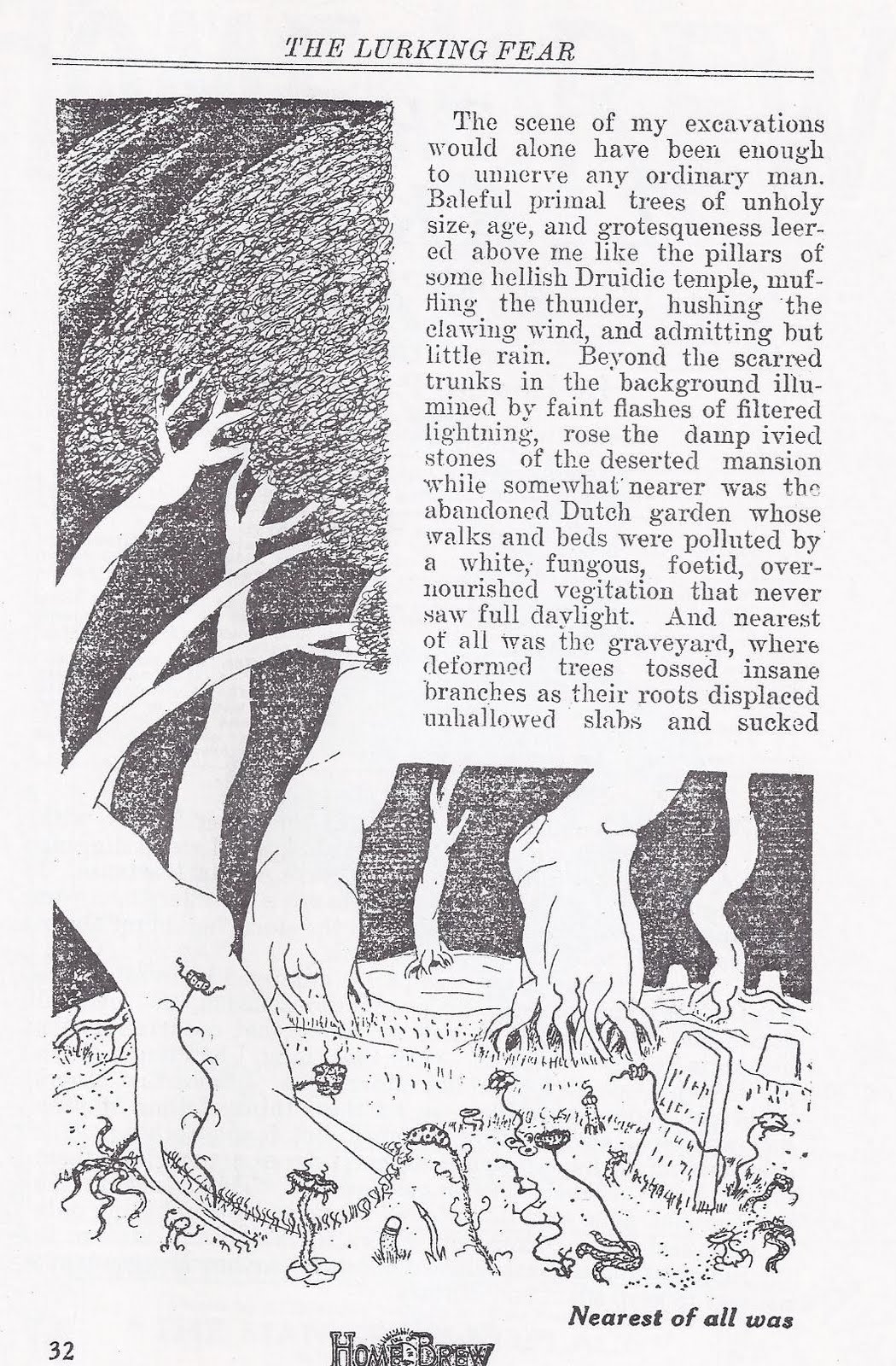 But the joke was lost on its intended target because Lovecraft was so utterly uninterested in sex he just couldn't see it, even when a friend pointed it out to him!
B

whats a good introduction to lovecraft?? a volume of stories would be ideal or something like that....


Mr. Tea said:
But the joke was lost on its intended target because Lovecraft was so utterly uninterested in sex he just couldn't see it, even when a friend pointed it out to him!
Click to expand...

And yet his name would let itself so well to a line of high-powered prosumer sex toys.
Last edited: Mar 27, 2014
S

I started on the HP Lovecraft Omnibus vol 3 - The Haunter of the Dark and Other Tales.

There seem to be loads of short story collections, though, and they're mostly good. Stories to look out for are the Call of Cthuhlu, The Colour Out Of Space, the Music of Erich Zann, The Dunwich Horror, the Dreams in the Witch House, the Shadow over Innsmouth, the Rats in the Walls, the Haunter of the Dark etc etc

Rather shamefully, the only printed HPL I own is TCoC and The Whisperer in Darkness, which came bundled with the Gollancz edition of Against The World... that I got a few years ago. Pretty much everything he ever wrote is available free online - I also got a "complete works" for Kindle on Amazon (not actually complete, but contains all his major stories and most of the more notable minor ones) for the princely sum of 77p.

Slothrop's list is pretty good. I'd say you can't really go wrong with any of the longer, later stories from TCoC onwards, although The Dunwich Horror is arguably a bit silly.

Houellebeqc lists the following as the 'Great Texts' of the Cthulhu Mythos:

* TCoC, obvs
* The Colour out of Space
* The Dunwich Horror
* The Shadow over Innsmouth
* The Dreams in the Witch House
* The Whisperer in Darkness
* At The Mountains of Madness
* The Shadow out of Time
* The Haunter of the Dark

For some reason he omits The Case of Charles Dexter Ward, which is great, and also the longest thing HPL ever wrote - it's really a short novel rather than a novella (though the same could be said of ATMoM and perhaps The Dream-Quest). The Rats in the Walls is probably his best and most fully realized story before TCoC. Other good stuff:

* The Silver Key, and
* Through the Gates of the Silver Key - some seriously psychedelic shit in that one; also
* The Dream-Quest of Unknown Kadath, if you can hack the incredibly flowery prose (he wrote this while he was first in thrall to Dunsany, I think) and the more self-indulgent fantasy elements.

* The Music of Erich Zann - a great shout from Slothrop; one of the few examples where, if anything, HPL errs on the side of telling the reader too little rather than too much - even so, it's a brilliant bit of cosmic horror injected into an otherwise rather Poe-like little narrative;
* The Festival - incredibly creepy, and the 'Necronomicon' quote at the end is just superb;
* Nyarlathotep - very short, a prose-poem really, and more or less a transcript of a dream he once had. Said to have been inspired by Nikola Tesla's touring roadshow of Frankensteinian electrical equipment that HPL witnessed as a young man.
Last edited: Mar 29, 2014

If you want to see just how bad he could be, read Herbert West - Reanimator. Although Joshi reckons HPL had sufficient self-awareness that this story, and a few others, are at least partly self-parodies.

The early stories are as purple as purple can be - nothing can be hideous without being described as hideous. There's more subtlety in the later stories, and the gathering weight of the mythos. It's all made more fascinating by the knowledge of Lovecraft's character - his misanthropy, his racism, his aversion to sex, democracy, modernity. I think "the haunter of the dark" is the best story I've read. The colour out of space is uncannily creepy too. I don't find any of his stories FRIGHTENING but then maybe I have just grown out of finding stories frightening? I remember being kept awake by "the shining" back in the day.

His prose isn't so much purple as ultra-violet - or perhaps some daemoniac hue unknown to nature and man alike!

I'm really enjoying I Am Providence - anyone else read/ing this? It's HYOWGE, I got it for Christmas and am still reading it, and that's only the first volume.

Mountains and Charles Dexter Ward for me.

What do reckon the chances are that del Toro will still make his intended adaptation? Sounds like it could still be on the cards, although I thought he'd more or less canned it since he started working on Pacific Rim (which I haven't seen, but by all accounts was a massive pile of arse).
Last edited: Apr 1, 2014

Probably for the best if it doesn't happen TBH. They should get the lad who did True Detective to direct instead.

I can imagine some of the stuff in Mountains (the penguins e.g.) might come across as a little bit silly in a film, but maybe somebody could pull it off.

You could actually make a good creepy film based on 'The Colour Out Of Space' - just something very bleak and sparse, and with no need for 'EFFECTS' outside of the body-horror of the diseased family and the meteor descending.

Id be interested to see what the adaption of Dan Simmon's 'the terror' is like. Obv not in the same league, but a pretty good tale of arctic (in the very cold sense) dread.