It's 40 years old this year, yet it doesn't feel dated at all, it's still being pored over by critics and academics, the alien itself endures and Ridley's still banging out sequels. What's the appeal? What makes it so timeless and how does it lend itself to so many areas of discussion? Is every film after Aliens really that bad?

I've tried watching this loads of times but I always fall asleep. Very slow moving isnt it. Prometheus is pretty good though. I think I've seen aliens but I can't remember for sure. Aliens 3 is definitely bad.

Ward envisioned a planet whose interior was both wooden and archaic in design, where Luddite-like monks would take refuge. The story begins with a monk who sees a "star in the East" (Ripley's escape pod) and at first believes this to be a good omen. Upon arrival of Ripley, and with increasing suggestions of the Alien presence, the monk inhabitants believe it to be some sort of religious trial for their misdemeanors, punishable by the creature that haunts them. By having a woman in their monastery, they wonder if their trial is partially caused by sexual temptation, as Ripley is the only woman to be amongst the all-male community in ten years. To avoid this belief and (hopefully) the much grimmer reality of what she has brought with her, the Monks of the "wooden satellite" lock Ripley into a dungeon-like sewer and ignore her advice on the true nature of the beast. The monks believe that the Alien is in fact the Devil. Primarily though, this story was about Ripley's own soul-searching complicated by the seeding of the Alien within her and further hampered by her largely solo attempts to defeat it. Eventually Ripley decides to sacrifice herself to kill the Alien. Fox asked for an alternative ending in which Ripley survived, but Weaver would only agree to the film if Ripley died.
L

part of the appeal is probably the strong female heroine character, not many of those in sci-fi films before that. it also had an extension of the whole "2001 space odyssey" thing where just a few humans are separated from the world, abandoned in a huge spaceship and left to their own devices in a cat-and-mouse game pitted against a superior being.

also, the alien in the original was landmark gross and creepy at the time, bursting out of stomachs all slimy.

I'm always interested to hear whether people prefer Alien or The Thing as they feel very much like a pair.

One thing that intrigues me about my own viewing of Alien is that I've always found Ash, the malfunctioning android, much more frightening than the alien. The scene where he finally snaps and tries to kill Ripley with the rolled-up magazine is terrifying.

When I was a young teenager I was "into" Alien/Aliens without having seen it, and the same went for Predator (which I saw the sequel of probably when I was 13/14).

As to the original film's power, I think it's a lot down to Giger's design, and the weirdly sexual nature of the facehugger/hatchling. The face huggers were scarier than the alien IMO, which Cameron exploited in Aliens to the max. The first one also is best because they don't explain where the aliens came from, unlike Prometheus
L

Sometimes, quite often, I think science fiction films are the best films.

I've got this long-running fantasy about staging Predator as an interactive theatrical extravaganza at our local community horticultural centre,
most of the film has minimal cast & set - 1 x cosplayer for the finale and a big box of fireworks
we will plan it next dissensus awayday
L

Corpsey said:
The first one also is best because they don't explain where the aliens came from, unlike Prometheus
Click to expand...

This is why I've been putting off Prometheus for years. My favourite part of the first film is the discovery of the derelict and how little there is to go on, you're just presented with this desolate planet and some bizarre biomechanical ship full of eggs.
L

Alien vs Predator is a top rate idea. They should try and make that again. I'd love a good version of that.

There's a paintball place in Doncaster where you can go up against the Predator.

The star attraction at BPF is the Predator – a 7ft tall hunter-warrior whose sole purpose is to ‘kill’. He searches for players and when he finds them he eliminates them – simple as that! However, the Predator only sees players if they move; stand completely still and he’ll move on without confrontation. If you move while he’s looking in your direction he’ll identify you as a threat and shoot you. If you’re brave (or stupid) enough to engage the Predator in battle, he’ll return fire until he’s done. But be warned, his superior firepower and accuracy rarely sees him defeated, and leaves many a good soldier squealing in his wake!!!!! 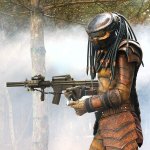 Are you more terrified by the sleek, sexual xenomorph or by the heaving, chimerical mass of "The Thing"?

You should make a thread about this.
L

If I think of anything interesting to say about it I will. I don't have an angle really. I don't even know if it's true.

It has to be the thing. Superior in almost every respect.