Dinner of the Day.

salmon and champagne, just another evening dinner 'round the teas.
L

a man of the people.

Leo you once reprimanded me for talking about my lunch when this is dinner thread or something. But now I see Luka is talking about spiritual development here and you're just letting it pass?

Last night I made a sort of thom kha gai with big prawns, mushrooms, sugarsnap peas and the some beans we didn't eat the day before. Well nice.
L

my bad, entertainment. even worse, I engaged in that discussion. utter breakdown in judgment on my part. luka, knock that shit off.

on the other hand...

this thread has expanded a bit in scope beyond Luka's originally intended documentation-only focus, as evidenced by him being the one responsible for taking it off topic. we'll have to consult the co-op board for current guidance on DOTD.

Leo said:
a man of the people.
Click to expand... 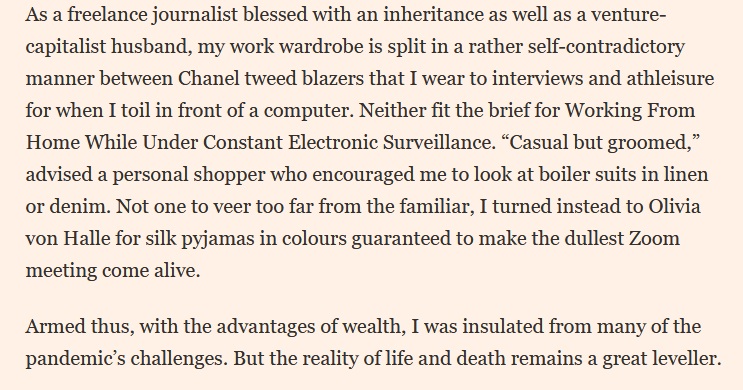 Aaaaanyway. I cooked a nice greasy fry-up of bacon, sausages and eggs for brunch today, so we uncharacteristically got vegetarian curry takeaway for dinner. Tons left over for lunch tomorrow, as usual.

Reminds me of this running joke we have, which is always activated when we open a decent bottle of wine to have with dinner and goes something like:

it's been common here during lockdown for restaurants doing takeout (aka takeaway) to throw in something extra as a thank you for the order, maybe a free salad or dessert. the cuban place gave use a container of the chicken risotto that is easily a serving for two, maybe even three people, so leftovers are in the offering.

I played squash again today. Been organising it so that there are four players and we play round robin... but two dropped out and it ended up with just me and this guy who had never played before having to play a whole double session. I knew this bloke was gonna be good, could tell he was super fit and does a lot of other sport and stuff, but I'd truly never thought that someone who'd never played before could pick it up that quickly. I started teaching him the rules as we warmed up and I was thinking "Fuck, he's faster, stronger, fitter etc than me and he's got really good hand-eye coordination and he learns really fast so I that I can use one shot to beat him cos he's not seen it before, but next time I try it he's picked it up and is ready for it". I was truly thinking to myself a) how the fuck am I gonna win and b) how embarrassing is it gonna be if I don't.
Anyway, luckily I did have enough experience and guile I guess to beat him, but it was a seriously tough fucking hour and, if he keeps playing regularly and improving and so on then he's gonna overtake me soon. Which is a bit annoying.
Also, it's a roundabout way of saying that I was hungry as fuck when I got in and so I just piled up a load of beans on toast with shitloads of butter (and extra salt) and stirred in loads of slices of cold meat plus chili powder and tobasco and so on to jazz it up. Also put some rocket in there for some reason. Really needed to power back up with a load of energy food after that titanic battle. I'd forgotten how much I missed a real game of squash like that. Fuck it's a good game.

More beans today... I'm thinking about switching to an all bean diet as it may allow me to create a smelly diversion at will on the squash court - a lethal tactic in such an enclosed space and one that I am prepared to deploy.
This time was white beans though... chucked on top of some fried veg and stuff, with numerous lumps of spicy chorico in there, and also I chopped up a farinheira sausage which ultimately dissolved when it was all cooked in wine, merely imparting its flavour and thickening the stew.

other peoples' leftover sandwiches from work