version said:
This is really noticeable in 'Valis'; Gloria, Beth and Sherri are basically all depicted as evil and trying to destroy everyone around them. He even describes Sherri as the antichrist at one point.
Click to expand...

I OD'd on him last year and have only read "Confessions Of A Crap Artist" this year - one of his non-sci-fi ones (though he manages to throw in a suburban UFO doomsday cult) and that also features the evil PKD woman archetype, screwing over her husband, brother and the married man she seduces. Calculating and scheming, but also like some childish but lethal force of nature. It's not a terrible book, and has some cool lines, but I wouldn't recommend it unless you've read most of his other stuff.

Ubik, Martian Time Slip and Flow My Tears... are my personal faves, in as much as I actually had semi-psychedelic experiences reading them (though I'd suggest ripping out Flow My Tears...' epilogue, which is totally godawful and pointless, and was probably forced by the publisher). I'd like to get back in a PKD groove for a bit, how was Valis, Version? Might try that next.

VALIS is really cool I think. I remember it read as though you are being bombarded with ideas by this demented paranoiac. I know that that sounds like the standard description of Dick as a writer but what made it stand out compared to the others was that the ideas were at a consistently high level so that there were lots of bits where it hits you hard and you sort of think "wow" or else you think "what does that mean? How does it fit with what he said a few pages back?" but in such a way that you don't throw up your hands in anger, you genuinely want to figure it out and understand what he's getting at. And the style, yes breathless, but effective and involving and with a personal edge to it that made you feel as though it were really his life and the stakes are thus real and very high.
It's funny that talking about the book now takes me back to being on a plane, I don't know where I was going but obviously I read on a journey I guess and, more than with most books, it instantly carries me back to the immediate moments of being on that plane even though I have no idea as to the wider context such as where I was going or how old I was and what else was going on in my life. So somehow a very affecting book that grabs you powerfully I think.
I've never read Ubik, I must get round to that one day. 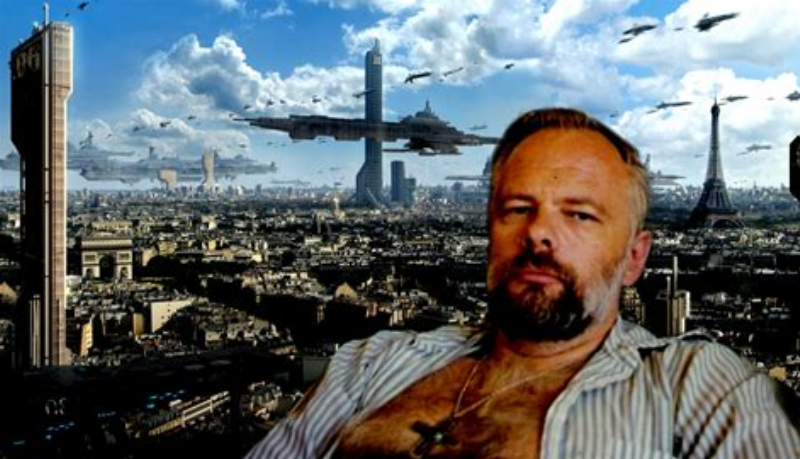 Read Valis at a bad time in life. It is merciless madness. Synchronicity upon synchronicity. A pained, damaged man fighting Pan and losing. The atmosphere, the real life political background of govt assets running drug rings adding to its varying delusional attributes. Suffocating. Then the possibility of redemption
lost
A study in dissociation. The pink light, the patternicity of the pharmacy girl’s necklace (was she even there?). 2/3/74. “Phil, tell me about your mother.......”

Got A Scanner Darkly and Ubik in the post the other day.

version said:
Got A Scanner Darkly and Ubik in the post the other day.
Click to expand...

delivered by a girl wearing a distinctive necklace, no doubt. 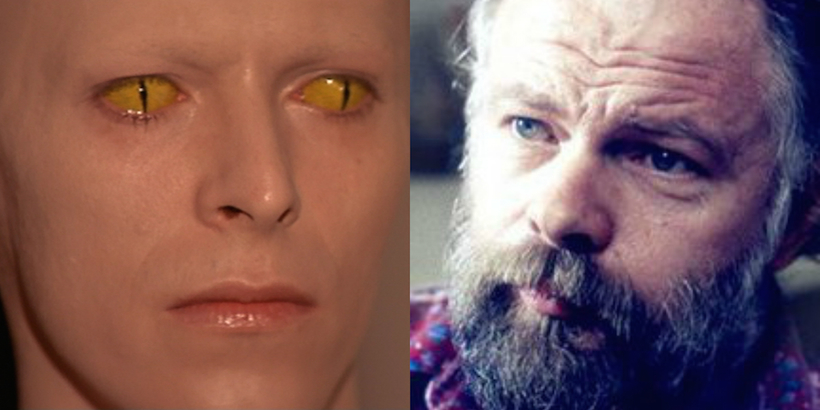 Seeing ‘The Man Who Fell to Earth’ was one of the greatest experiences of Philip K. Dick’s life

I have to admit that the first time I saw The Man Who Fell to Earth, back in the bad old days of pan-and-scan VHS, I was bewildered and bored. I don’t think I even made it to the part where Bowie takes off his human drag to reveal his true alien form. Now, it’s one of the very few movies I watch...

I read Valis a few months ago - an account of mental breakdown and/or enlightenment - I'm still not sure which, damn sad in places.

I am reading Ubik atm, about half way in and the timeshift is a bit wierd, coins from the past, stale cigarettes etc. And those adverts at the start of each chapter. Pretty good description of the internet for 1969 perhaps based on the ARPRANET would become.

“I’m your free homeopape machine, a service supplied exclusively by all the fine Rootes hotels throughout Earth and the colonies. Simply dial the classification of news that you wish, and in a matter of seconds I’ll speedily provide you with a fresh, up-to-the-minute homeopape tailored to your individual requirements; and, let me repeat, at no cost to you!”
W

Bang Diddley said:
I read Valis a few months ago - an account of mental breakdown and/or enlightenment - I'm still not sure which, damn sad in places.

I am reading Ubik atm, about half way in and the timeshift is a bit wierd, coins from the past, stale cigarettes etc. And those adverts at the start of each chapter. Pretty good description of the internet for 1969 perhaps based on the ARPRANET would become.

“I’m your free homeopape machine, a service supplied exclusively by all the fine Rootes hotels throughout Earth and the colonies. Simply dial the classification of news that you wish, and in a matter of seconds I’ll speedily provide you with a fresh, up-to-the-minute homeopape tailored to your individual requirements; and, let me repeat, at no cost to you!”
Click to expand...

In The Simulacra ( 1964 ) he predicts what I take to be drones with "personalised" adverts:

Something sizzled to the right of him. A commercial, made by Theodorus Nitz, the worst house of all, had attached itself to his car.
"Get off," he warned it. But the commercial, well-adhered, began to crawl, buffeted by the wind, toward the door and the entrance crack. It would soon have squeezed in and would be haranguing him in the cranky, garbagey fashion of the Nitz advertisements.

He could, as it came through the crack, kill it. It was alive, terribly mortal: the ad agencies, like nature, squandered hordes of them.

The commercial, flysized, began to buzz out its message as soon as it managed to force entry. "Say! Haven't you sometimes said to yourself, I'll bet other people in restaurants can see me! And you're puzzled as to what to do about this serious, baffling problem of being conspicuous, especially-"

Chic crushed it with his foot.
Click to expand...

We've not reached that point yet, but it's only a matter of time... 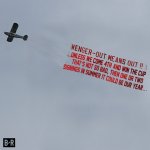 In 'The Unteleported Man', the drones hover above and harrass debtors, loudly reminding them how much they owe and asking, mockingly, how they intend to repay - for maximum embarrassment and social death.

What, even if it's a totally unmerited bill for a small amount around five hundred quid or so?
But yeah, the embarrassment factor is definitely a huge part - or it can be depending on the victim. For example, when I had just moved to Portugal some bailiff had decided that I owed a few hundred quid to them or their "client" (as they ludicrously tend to call the shitty council or whatever whose uncollected bills they have hoovered up for about 3p in the pound and ramped up to ridiculous values by adding in incredibly spurious extra charges) - obviously they couldn't follow me to Portugal - though no doubt in their minds, my "fleeing" the country was the clearest possible admission that i owed the ludicrous sum of money that they had magicked up and that they would in fact be well within their rights to stick a couple of noughts on the end too.
So I guess the last UK address I gave was my parents' address in Oxfordshire, turned out to be a terrible mistake. My parents suffer from that naivete that afflicts lots of middle-class people who have never been on the wrong side of the law, namely the belief that authority is always correct and never corrupt, and this - combined with the above-mentioned fear of being embarrassed - meant they were a perfect victim for these thieving scumbags.
Basically Mr Rundles or whichever ever group of vultures it was gave them a totally insane demand for something in the region of ten thousand pounds..... which Dad dutifully paid right then and there! And then he phoned me and said a) how could you be so irresponsible to run up such a crazy amount of debt? and b) you owe me nine thousand six hundred and eighty three pounds by the way.
It's odd to me that someone can have a successful forty year career or whatever it was in and around finance and yet fall for something like this in seconds. That training that taught them to bow to authority meant that they were hopelessly without any defence when the thief was wearing a badge. Even to this day they won't accept any version of events that differs from the official version of "Richard didn't pay any council tax whatsoever for ten years and ended up needing to borrow from us to get out from it" and any arguments that I put forward are squashed by "They had a bit of paper which said you owed ten thousand pounds on it (well we assume they did, we didn't actually read it)".
B

martin said:
In 'The Unteleported Man', the drones hover above and harrass debtors, loudly reminding them how much they owe and asking, mockingly, how they intend to repay - for maximum embarrassment and social death.
Click to expand...

He has this sort of idea in Ubik too, where you can't open your apartment door without paying, your own coffee machine needing payment and machines rejecting his money as it's from the wrong 'time' - can't say much more without spoilers. Further compounded with Joe Chip being constantly skint and borrowing money.
M


"We Can Build You" - for one of his supposed pulpier 'binge on speed and hack it out overnight to pay the bills' books, I found this quite affecting. You've got this funny plot about clueless replicant builders trying to make a quick buck, and an exploitative lunar slum landlord, but then some very trippy, poignant thoughts about mental illness and lost love, plus a genuinely disturbing depiction of an obsession raging out of control. Spoiler - the UK edition features a drawing of 'robot Hitler' but he doesn't feature in the book at all.

"The World Jones Made" - interesting name for a cult leader. And then you have a bunch of fascist, anti-alien street thugs called the 'Jones Boys'. Not bad, an interesting take on how precog powers could be a complete pain in the arse, and there's a fight scene with a gender-shifting hermaphrodite that made me laugh out loud.
Scored 'Valis' on eBay and am keen to get stuck into it next.
You must log in or register to reply here.
Share:
Facebook Twitter Reddit Pinterest Tumblr WhatsApp Email Share Link
Top