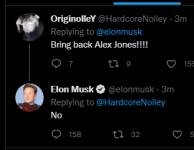 can we crowdsource an assassin? ( I'll let you guess for who, but if they do a "buy one, get one free" deal then I'm sold )

Musk is so full of shit, makes a huge deal before the sale went through about all the bots. Where do you thing a lot of those yes votes came from?
V

Yesterday, Elon Musk told Twitter employees that he plans to let users send crypto to each other alongside “normal money.” Said he expects that “the payments side of things will probably be more valuable than all the rest of Twitter combined.”
Click to expand...

The rest of it probably has negative value though so...

IdleRich said:
One of them is right near Martim Moniz which is one of the major central squares. It's just round the corner from one of Lisbon's biggest police stations which is kind of amazing. The way it works is the actual seller is up a narrow alley amongst a warren of alleys and they have look-outs at all the entrances to that bit who can see quite far, like they will be able to give a warning when the police are minutes away I imagine, if they shout then the guy can escape into this maze of alleys, and, I reckon, into several of the houses there. I dunno how much they have on them but presumably there is some thought there about carrying below the limit for certain categories of crimes - though it does always look to me as though they have an awful lot so maybe they are so confident they can't be caught they can ignore that. I find it quite interesting to think about how they do this and why it is so difficult for the police to stop them. There are loads of airbnbs and stuff nearby, I wouldn't be surprised if that ends up being a bigger problem and that spot gets gentrified out of existence eventually. Or at least has to move to a new location.
Click to expand...

The police had a bit of a go at this one today it seems. I'm not sure if they are actually hoping to get rid or if it was some well-timed trolling. I only saw bits of it but what caught my eye was how quiet it was when I walked past the bit where the look-out guy normally hangs out. His base is at the bottom of a little alley next to a cafe, where it opens out into a junction with four or more lanes meeting and making almost a clearing between the buildings. The thing is, that whole area is always busy, as well as the look-out there will probably be a couple of his mates and a few other gang guys just kinda hanging around, also some higher up ones in the cafe probably counting money and keeping an eye on things, but today it was absolutely dead. Normally even if they are not selling or they are re-filling they still leave people there, I guess to show that they are still in business and probably to persuade passers by to wait for them to open the shop again instead of buying from someone else - but not today.

I could see that there were a few people sort of looking confused and disappointed and walking away etc a few of them started queuing at the place where they make people wait when they reload or whatever. That seemed really odd to me, almost like some kind of cargo cult thing, however much you queue there it aint gonna make drugs appear at the top of the alley mate - there's no-one there! Then some guy walked past and said that the police had come earlier and that the shop was closed until tomorrow. I assume that it must have been more than them just walking past cos if they do that then the guys have a warning and a few of them disappear for ten minutes while the ones who aren't holding or already in trouble (I assume) just watch from a safe distance - and then they come back and start selling. But this time everyone had totally cleared out, so I'm guessing they did something with more people involved or maybe they came from several directions - something spooked them enough to make them completely vanish. But the buyers were back by now, the queue was getting pretty long in fact.

I walked off into town and I actually saw three of the blokes from the corner just mooching around with their hoodies up and they said "30 minutes we open again" - but the funny bit, or the reason why I said it was trolling is cos later (probably just over 30 min later in fact) I was going to get my car from the carpark which is under Martim Moniz square and I was on the side of the square nearest to where they sell from when, suddenly, from an alley that connects to the corner emerged a whole massive load of junkies moving fast. From what they said seems police raided again the second they started selling. In other words, they chased them away from there and shut it down (I dunno how long for of course, maybe hours) and waited patiently for them to get their courage back and for a huge queue of customers to build up and, then, just when they are about to start again, they came in and fucked it up again.

And I wonder if that's just some frustrated cops being annoying or if it signals the start of a new way of dealing with it. Cos the way I see it, they would only have to do that a few times a day for a few days and - if it were me - I would get annoyed and move elsewhere. And I could imagine that they would want to shift this out of a tourist area... but who knows. I actually wish I could go down there tomorrow and check out what's going on but likely I'm gonna have to do something else sadly. Shame, I would like to see what I can... as long as I don't get scooped up and stuck in a van while I'm nosing around of course.
C

Does anyone remember the time last week when lots of Blue Ticks convinced themselves that Twitter was about to shut down and so they all started saying farewell to each other and their followers and reminisced about their favorite Tweets? It was amazing.
S

he's the new richard branson. great that he's such a berk, i had at least one mate who was really into him as part of the steve jobs type tech guru thing,presumably that kind of believe is unsustainable now. that cultural thread could do with being ground down, for political reasons and because it's really annoying

Mr. Tea said:
Can you give an example of something you think used to be a left-wing value but is now more important to the right?
Click to expand...

pattycakes_ said:
Free speech for one
Click to expand...

Elon Musk Bans CrimethInc. from Twitter at the Urging of Far-Right Troll

At the urging of a far-right troll, Elon Musk banned the @crimethinc Twitter account—a partisan move paving the way for fascist violence.

Linebaugh (@GovtHm) is getting involved in the big issues. Glad to see him making a difference!