I went over to marzahn when i visited as a teenager cos i wanted to see the soviet flats. Had a rough feel, quite a lot of skinheads about. Dunno if its still like that.

very much so, @catalog. not dangerous, but there's a vibe. i'm parked in a kind of between zone with not much residential around me. 15min walk and it's a sea of plattenbau aka tower blocks 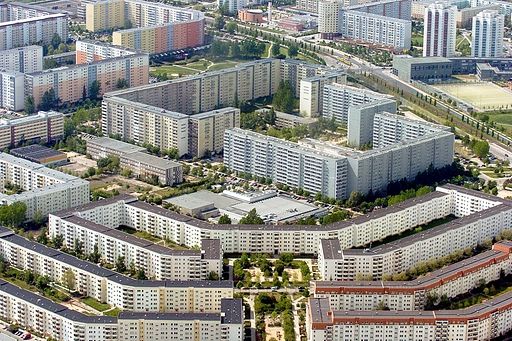 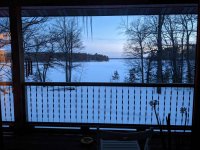 is a discouraging word seldom heard around your way, @suspended?

Weather is weird here at the moment there was actually thick fog which I don't think I've ever seen here. Sometimes there is a slight mist in the very early mornings but never so dense and it never lasts until the afternoon. But then when it did finally evaporate around 3pm it was really warm, like t-shirt weather. You can feel summer trying to happen, it's gonna be 19 or 20 degrees tomorrow. 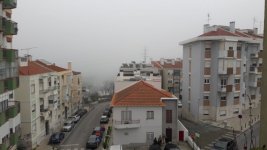 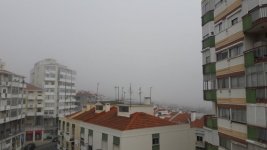 pattycakes_ said:
is a discouraging word seldom heard around your way, @suspended?
Click to expand...

Rich, are you on or near the coasts?

Er, yes and no. From my window you can see the Tagus estuary which almost looks like the sea cos at this point it is 20km across and still salty and tidal and we do get jellyfish coming up from the sea (if you look at the picture I put on page two of this thread from a clearer day you get some idea of this although my camera is a bit crap). But to get to the sea proper you have to go down all the way to Lisbon and a few k past it where there are beaches which are technically beside the sea, but if you look at the map it's not the really the open sea until you reach Caiscais or whatever, it's more like a huge bay. Also we go to Sesimbra or Setubal sometimes which again are technically on the coast but if you look at the map, again it's really like a huge bay not the open sea.
Alternatively if I just drove straight west and went to Colares or Nazare (which is famous for having the world's biggest surfing waves) then we would be properly looking out from some of the most westerly points of Europe directly across the Atlantic to the US - looks like probably Georgia or South Carolina - and that's maybe 45km from us. So, in the grand scheme of things still close to the coast, though not right on it I guess.

Thanks rich! I was curious, the buildings seemed vaguely coastal but

this is a holiday snapshot right? not your own place?

yyaldrin said:
this is a holiday snapshot right? not your own place?
Click to expand...

The midlands treat me well, what can I say. Paying 40% of what I did in New York, for twice the number of rooms plus the big backyard pictured. Exodus to the country! Start a cult where real estate is cheap and invite all your friends!

Europe has less space I guess

it's breathtaking, and there's the veranda even! it looks like one of those mansions james bond would retreat to so he can heal his wounds and wait for his next mission objective.

Thanks yyaldrin! It's good to get reminded, it's incredible and breath-taking for about three weeks until you get used to it and it's just another view.
C

Does - 24 bother you spenny or do you like it. Hot Summers tho as well tho isn't it?

There are some other homes on the lake, you can sorta see in the picture distant lights and roofs, but we're in a marshland where you can't build sanitation tanks. So it's pretty empty around here, we have a rare patch of dry land on the corner of a friend's property. (A cranberry farm, hence why the marshes)

catalog said:
Does - 24 bother you spenny or do you like it. Hot Summers tho as well tho isn't it?
Click to expand...

Summers aren't so bad, it'll get up into the 80s, maybe 90s at points, but nothing extreme.

The winters are indeed brutal but the main problem is cars. Machines just don't run. Step outside with your smartphone it's dead in about 12 seconds or less. If you're bundled up, a walk isn't so bad. You do layers, I have a pair of long johns, then a pair of fleece sweatpants, then a pair of gortex pants to cover/protect from wind and snow. Up top, long-sleeve thermal, sweater, thick fur-lined jacket. Trapper hat or something on the head, throw in a scarf and good gloves, double socks, snow boots. Each layers gives you 15ish degrees more protection, so if you're properly bundled, -15 doesn't feel much different than 30F (0 C).

That said, we had temps of -40 and wind chill below -50 today. Apparently frostbite starts setting in after four or five minutes of exposed skin. Little gnarly. My partner Nico did a 3hr drive to the airport this morning, was a bit worrying whether her car would break down or.

Spenny lives in a freezing cold paradise. America is such a beautiful country, it really takes your breath away.

Craner you ever done a x-country trip here?