martin said:
This was my gateway. £5 and a death glare from Keith in Daddy Kool.

Even with his skinhead era stuff, he was organising tunes that sound like Chas & Dave jamming with Kraftwerk

reminds me of Jammer in that sense, remember when i saw Wiley down Brixton on my birthday some years back, he sounded so bad
M

luka said:
Skinnyman who like you is a NW Irish urchin never stops going on about Chas and Dave he loves them
Click to expand...

I was once on the same flight as them from Newcastle, around mid-2000s. They both looked grumpy as fuck and were blanking each other. The person I was with said hi to Chas and he just mumbled a reply and walked off. When we got to London, Dave shot off to baggage reclaim without even saying bye to Chas, who looked like he wanted to kill someone.
R

super ape was the one for me.
D

Can't believe I've not heard this one today until now:

Wicked record...I Roy and Scratch launch their own passenger rocket service from London Town to Venus and Mars. Maybe should've deployed two separate rockets? Dread the thought of that round trip. Then again, if Lee Perry was toasting over the intercom and cutting new tunes, would have been more than bearable

Woebot turned me onto this one 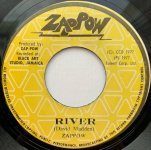 another beauty (and no cows mooing or babies crying)

In a similar vein to River. Something about the dreaminess of the vocals and phased guitar (or is that an organ?) over that knocking rhythm is sounding rather contemporary right now

fun fact: Pete Waterman got a Jaguar out of that tune...

When aspiring pop music producer and mainstream record executive, Pete Waterman heard the tune playing in a record shop, he realised its hit potential, and brought a copy of the song to the major Magnet label, who were promoting big-name commercial pop acts like Alvin Stardust and Guys and Dolls. Magnet approached DIP and licensed the single, bringing it straight into the UK charts in March 1975. Cadogan was duly summoned to London for an appearance on Top of The Pops, complete with an Afro-wig and coloured contact lenses.

As ‘Hurt So Good’ leapt to a number four position on the UK pop charts, Perry flew to London to confront his budding starlet, who was now in league with Magnet, the company who reaped the most from the tune after acquiring it from DIP.

“Magnet said that they need me to sign this contract”, Cadogan explains, “they put me in a hotel, they did everything for me. I remember Perry coming to my hotel room, he walk up and down and ask if I sign anything with these people. I say, ‘No I haven’t, but I have to sign something with them, they say they own the record’. I remember he held my wrist and said, ‘If you sign that thing I’m going to make sure you never get a cent!’ and I was annoyed.”

As Magnet had flown her to London and were paying for her living expenses, Cadogan felt she had no other option. Young and inexperienced, she signed a contract that was definitely not in her favour:

“I got £3,000 on signing with Magnet, and every statement I ever got from them, they excluded ‘Hurt So Good’ from it. That one money I got, that was it, and out of all the royalties they were getting, they paid all my airfare, my hotel bills, my clothes, food and everything, so I was always in debt. I remember Magnet bought Pete Waterman a Jaguar for finding ‘Hurt So Good’, and they said that I couldn’t drive so they wouldn’t bother give me one.”
Click to expand...

Luka is bang on about Grand Royal and Arkology. Both great. Dave Katz and Steve Barker compiled Arkology I think.

Katz was a real LSP evangelist and got a load of features on him into music mags and newspapers. And did the biography.

Before that in the 80s you also had the three Trojan box sets compiled by Steve Barker. Three LPs in each. That’s how I first heard him i think.

I did hear the odd Perry tune on revival radio slots and the Mannaseh lads would have played him on Kiss FM too.
W

I had an aba-shant-i tape that kicked off with a blast of dub siren over Lacksley Castell's "Jah Love is Sweeter" and then went into Devon Irons' "Ketch Vampire", so he was played occasionally on Sound System

‘This track I first heard when my Dad brought it home from Paul Marsh’s record shop in Moss Side in 1976. Loved it then and still love it today. It brings back so many great memories of seeing and hearing my Dad play it on his Mellow Tone Sound System. This was probably the first time that I became aware of that ‘Lee Perry Sound’ – the dull sounding keyboard chords, the sharp high-end treble of the cymbals, the warm but prominently soft bass guitar sound, the guitar with ‘that’ effect on it – that one-a-way Lee Perry Sound that so many people across the world became to love.’ Mikey DON
Click to expand...

DannyL said:
Nice to think of him as an old letch. Hope he's bed jamming in the beyond.
Click to expand...

or playing music with peter rehberg

william_kent said:
he got played on the radio in the North West - although it was on Steve Barker's "On The Wire" show for BBC radio Lancashire rather the local pirates
Click to expand...

broadcast from further up Darwen St. from where my dad used to work.

I'd imagine Prodigy Out of Space will have been the first time many will have heard him. I didnt know (or care) until years later where that sample came from.