ome said:
this document is being heavily read at the moment:
https://www.lifeworth.com/deepadaptation.pdf
Click to expand...


ome said:
beyond borders action is on at the moment.. https://theecologist.org/2019/jul/28/fortress-europe-and-climate-apocalypse
Click to expand...

I think xr will be on manoeuvres at DSEI this week https://www.stopthearmsfair.org.uk/

whoops Roger got nicked, i wonder if the plan is to keep him til the 20th
T

idiot white middle class man. advertising a crime weeks beforehand is never a good look. by all means get arrested if u want to, but fucking commit the bloody crime first.
O

thirdform said:
idiot white middle class man. advertising a crime weeks beforehand is never a good look. by all means get arrested if u want to, but fucking commit the bloody crime first.
Click to expand...

be interesting to see what happens now, it was always designed to be leaderless..
i do know the the police tactics have changed, but xr’s has not. let’s see how both those a things go..

here was his last talk: it’s a bit dark. so make sure u can sit down and have a strong cup of tea and a hug standing by. https://youtu.be/O_g3zoL8TFU

thirdform said:
idiot white middle class man. advertising a crime weeks beforehand is never a good look. by all means get arrested if u want to, but fucking commit the bloody crime first.
Click to expand...

quite agree, it is a deliberate chosen tactic - in itself the announcement creates disruption and amplifies the event though, which is all successful on its own terms. by announcing the evnt they get to define those terms - including poking fun by saying they won't pose a genuine threat but will provoke a genuine response. That only worked somewhat as the cops apparently "jammed" the drone signals, so there was no big spectacle, and also no airport shutdown. without the announcement there'd have been nothing much at all. so i don't know, as a drama it was moderately successful, and perhaps that's the whole objective, if so it's a misconceived strategy imho - as an action it was a loss - several arrests with only publicity to show for it.
also Roger was not satisfied in being arrested for announcing a plan to drone near Heathrow, i believe that as soon as he was released he want and did it in order to get re-arrested - is that right? is he still inside? i wonder how far he is consciously demonstrating solidarity with all the xr activists he's encouraged to get locked up. as you say ome the movement is designed to be driverless, but there's still seems to be a fair bit of glorious martyrdom personality cultism going on there - they are strong on establishing group-think more than operationally effective so far...

sorry, not to knock the demos which have been unprecedented and awesome, but no concessions achieved so far - & maybe raising awareness just raises the stakes
O

yep self organising system are new and tough to do.. so easy to fall into old patterns of hero’s, victims and villain!!

here is is video from yesterday from prison:
https://youtu.be/Da2kkILHOVk
O

oh and here is the same message from the other half of xr
https://youtu.be/JhYh1L5ke-Q

ome said:
oh and here is the same message from the other half of xr
https://youtu.be/JhYh1L5ke-Q
Click to expand...

this is great and everyone should view it

i'm intrigued about the xr "policy" on police. Activist types criticise them endlessly for this in most patronising terms, i wonder whether it's more deliberate - xr are disdainful of activism, though there are seasoned activists among them who know the ropes. But i haven't seen any activist type asking that question: what are the reasons why you are soft on cops?

has the cops' "new strategy" made any difference? what even is it? cops in soft hats and shirtsleeves and purple rubber gloves trashing tents in front of the press in whitehall in the rain on the telly

the season is harsher though, this is definitely round 2.
both sides are more prepared, more committed? more entrenched? 100s more have been arrested by now & roger is in prison

everyone should be supporting them as long as they keep on challenging the deathstar, because who else is out there atm?

looking forward to my next update from our mole ome
O

question: what are the reasons why you are soft on cops?

looking forward to my next update from our mole ome
Click to expand...

and we still don’t blame the police as individuals. we model our behaviour on the world we request- holding both love and rage in our hearts. teal init.

itÂ’s been brutal sufi.. feel like the press are showing nothing.. I hear there are some crazy videos of me in the thick of it in huge crowds floating around (iÂ’m a non-violence atomsphere worker. been training for 6months with therapists.

iÂ’m on 48h regen. now. back on friday night for the mad max fancy dress party.

Maybe I've missed an announcement or two, but: given that Labour has embraced the Green New Deal, at what point are XR going to come off the political fence? There's a reasonable argument that they changed the political climate sufficiently for Labour to make that move, so what's the point in working hard to do that and then not campaigning for it to actually happen in, like, reality? Like having the winning lottery ticket but refusing to go to the shop to claim your prize...

Plus they can advise voting for Labour (or at least excoriate the Tories) while still criticising their policies as they feel necessary....it's a win-win
Last edited: Oct 10, 2019
D

I guess they wouldn't want to be seen as too much of an adjunct to the Labour Party? Given the strong union voices in Labour that had to be brought off for any kind of the GND to become policy, who can blame 'em? 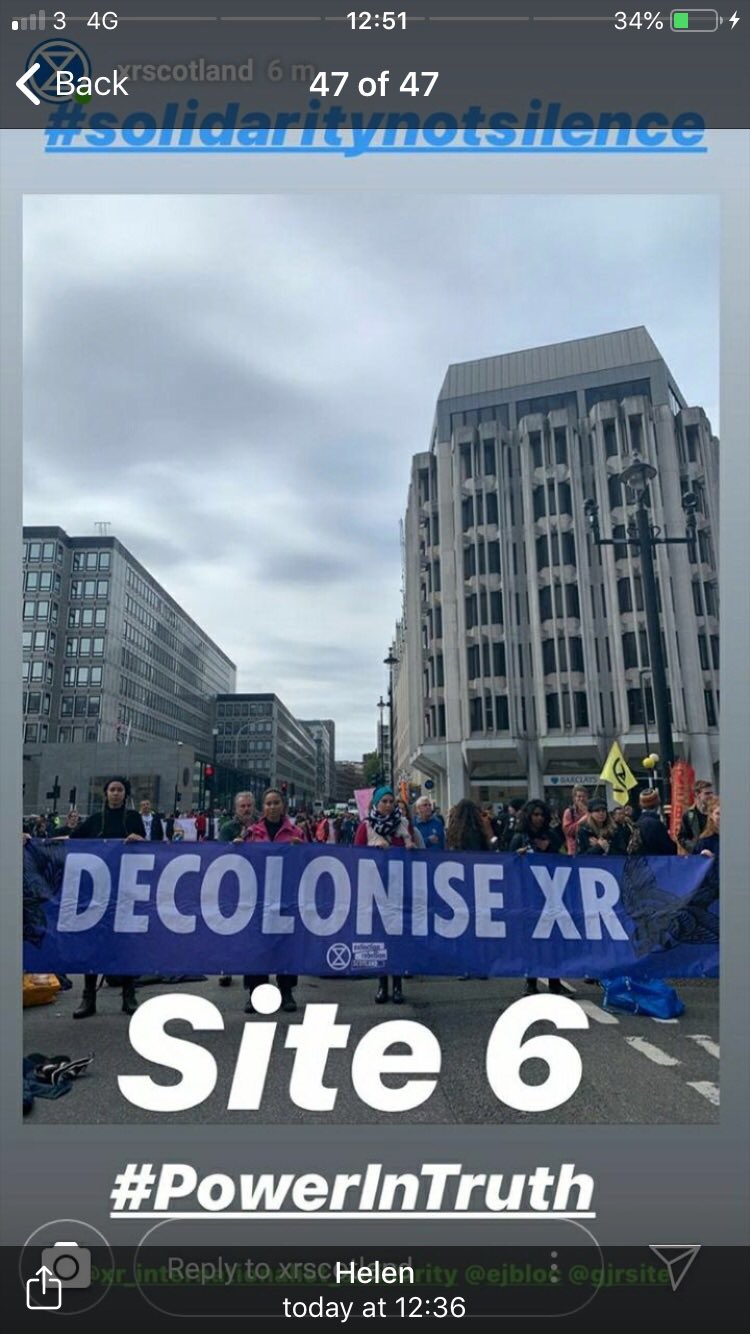 sufi said:
this is good

if it was’t for peace and faith the other 11 site would not of held ground.
they took about 200 into custody from those sites in the first three hours on monday... amazing to been told of ministers of all faiths of all kinds sitting in the middle of the road praying together. Strong together, thier power in non-violence.

we now have three sites:
Trafalgar sq. As i write this several hundred coppers are trying to clear it again, taking all our warmth and shelter, .. they took out toilets, food (thank god for the hare krishnas!), they reversed the pumps on the fountains to flood us out. we are not our kit. We are crew.
tonight: mad max fancy dress - remember no drink or drugs, and party is over by midnight because tomorrow is another day. (i’m on shift all night here)
City Airport: The press have complied with police request to clear the area, pain and compliance techniques now being used as standard practice to non-resisting protestors. They still as far as i know are holding strong.
Vauxhall pleasure gardens: familly camp, set up yesterday. lambeth council is assisting with sanitation and other safety services. good for sleep and a massage.
O

i'm intrigued about the xr "policy" on police. Activist types criticise them endlessly for this in most patronising terms, i wonder whether it's more deliberate - xr are disdainful of activism, though there are seasoned activists among them who know the ropes. But i haven't seen any activist type asking that question: what are the reasons why you are soft on cops?
Click to expand...

felt this deserved a more of an answer:

i love xr for itÂ’s synthesis of so many great newish ideas. many from psychology.
- other forms of effective power apart from force and cohesion (french & raven)
- wilber, spectrum of consciousness, integral, going beyond poor me donÂ’t you feel bad Â‘green meaniesÂ’ etc. The ability to hold conflict... i.e. we are now in teal consciousness.
- Marshall Rosenberg: (and active listening in general) getting in touch with feelings, understanding the needs behind those feelings. Conflict resilience through alternative stratagem to meet those needs..
i.e. i empathise with my self and the police as individuals, they imo often have a need to provide safety for the group and find role and purpose in this. i get their pain caught in the system. i do not blame them individually. yes i feel ferocious rage at the same time.I also understand imo that groups of people have made decisions to destroy the potential of life in the future. Yes I very much blame the group and the idea space they hold who use these imo fatal strategies for life on this rare planet. This is such a struggle for me as i see how the police pick on minorities and the innocent and vulnerable in the last 3 days. many tears.


here is an example of a message this morning on broadcast:
Â“We remain non-violent and respectful where respect is shown to us. We avoid blaming and shaming those whose actions are also affected and fuelled by this toxic system - even police. These are part of our core Principles and Values that we ask Rebels to adhere to when they join our movement.

As a result, itÂ’s the suggestion of Media and Messaging reps that neither Â“We love youÂ” nor Â“Shame on youÂ” are appropriate chants to direct towards police.

If you do want to address police, consider asking them whether they have children and are worried for them, or whether the government is doing enough in their eyes to protect us from a future of social instability and violent crime, e.g. when food shortages occur.Â”
Last edited: Oct 11, 2019
O

DannyL said:
I guess they wouldn't want to be seen as too much of an adjunct to the Labour Party? Given the strong union voices in Labour that had to be brought off for any kind of the GND to become policy, who can blame 'em?
Click to expand...

non-political. - think of them perhaps as a lobby group?

non-political. - think of them perhaps as a lobby group?
Click to expand...

well, what they're doing is obviously political, but they don't want to ally themselves to a political party. I get the point about not wanting to be seen as an adjunct to the LP, but it's clear that if the Tories get in again (esp on the back of a no-Deal Brexit with greater US influence) then things will get much worse. Being 'neutral' at election time would be insane.

The Teal paradigm refers to the next stage in the evolution of human consciousness.[1] When applied to organizations, this paradigm views the organization as an independent force with its own purpose, and not merely as a vehicle for achieving management's objectives. Teal organizations are characterized by self-organization and self-management. The hierarchical "predict and control" pyramid of Orange is replaced with a decentralized structure consisting of small teams that take responsibility for their own governance and for how they interact with other parts of the organization. Assigned positions and job descriptions are replaced with a multiplicity of roles, often self-selected and fluid. People’s actions are guided not by orders from someone up the chain of command but by ‘listening’ to the organization’s purpose. Unlike the highly static nature of Amber, Orange and Green organizations, the organizational structure in Teal is characterized by rapid change and adaptation, as adjustments are continuously made to better serve the organization's purpose.
You must log in or register to reply here.
Share:
Facebook Twitter Reddit Pinterest Tumblr WhatsApp Email Link
Top