Iraq - Still, In Fact, Going On

just in case you forgot. (which it's surprisingly easy to do, at least in the States where it seems to be pretty far off the table right now)

Exhibit A - Iraq Suffers as the Euphrates River Dwindles - great

went to see The Hurt Locker w/my folks the other day. it is, not to put too fine a point on it, fuckin' A phenomenal. stunning. I reckon the defining cinematic statement on the war, can't see how anything would top it. stirred up all kinds of feelings in me - pride, shame, & seething, futile rage.

still waiting to see whether sectarian violence spikes in the upcoming weeks. whether or not Maliki & co. have any kind of a handle on things. what the Iranian regime will do, if anything, given its own current problems. & so on.

a stalemate's better than nothing I guess.

I liked this line:


Ret. Gen. John Abizaid said:
If you try to control the Middle East, it will end up controlling you
Click to expand...

Col. Timothy Reese - It's Time For the U.S. to Declare Victory & Go Home

or declare victory & get thee to Afghanistan, more like.

We too ought to declare victory and bring our combat forces home. Due to our tendency to look after the tactical details and miss the proverbial forest for the trees, this critically important strategic realization is in danger of being missed.
Click to expand...

Damn -- not mincing his words there...
P

vimothy said:
Damn -- not mincing his words there...
Click to expand...

nope. but it's hard not to wish there'd been a lot less mincing of words over the last 6+ years...

thought that point in the WP article you linked about ambitious military officers trying to get switched into Afghan instead of Iraq deployments was interesting. that's certainly what I'd be doing.

Interesting to contrast that article with the comments of Anand at AM -- generally get a really favourable impression of the IA from him.

Also, see this story for some context to the above: http://washingtonindependent.com/53...icial-u-s-should-withdraw-from-iraq-next-year
P

vimothy said:
Also, see this story for some context to the above: http://washingtonindependent.com/53...icial-u-s-should-withdraw-from-iraq-next-year
Click to expand...

nice that Col. Gentile got a mention. here's the NYT article where I originally saw Reese's memo mentioned. includes link to a pdf of the On Point II paper, a history of the war 2003-5, which Reese coauthored while at Fort Leavenworth (around the same time Petraeus was there).

as far as the IA, who knows? I think it depends on what you mean by favorable. in some ways Col. Reese's view was favorable, in that he cites major improvement & describes the IA as up to the task of keeping the GOI in power. I suspect what he says about the entrenched military culture is largely true, as it matches the majority of what I've read as well as what I've heard from just about every vet I've talked with. another thing that gives Reese credibility are military's weak responses, typical disavowal stuff, e.g. - "there were problems but now they've been solved" or a discrediting "it's just the view of one man", same old same old.

the real debate anyway is about the timetable for withdrawal & there's certainly a ton of factors that go into that. but I haven't seen anyone come out & claim that it's not largely diminishing returns from here on out.
S

The accusations against Mr Prince are being made by two former employees, including a former Marine, who have sworn them anonymously as John Doe No 1 and John Doe No 2, because they said they feared for their lives if their identities were revealed.

In one of the statements, John Doe 2, who worked for Blackwater for four years, alleged that Mr Prince “views himself as a Christian crusader tasked with eliminating Muslims and the Islamic faith from the globe” and that his companies “encouraged and rewarded the destruction of Iraqi life”.
Click to expand...

Iraqi officials reacted gleefully to the news of fresh allegations against the company in legal documents filed in the United States.

“The company is mainly made up of mercenaries who lack high standards and discipline like official forces of international institutions,” said Tahsin al-Shekhli, a Defence Ministry spokesman.

“They needlessly massacred Iraqi citizens, and in cold blood."
Click to expand...

oh, re the recent violence at Camp Ashraf (“Our hospital is out of medicine and there is no place for the wounded,” he said. “They are resting in every place we can put them"), at least 12 dead? smells like a massacre.

yes, it is the NCR, and here's their statement.

at least - as when we last discussed this tragic stand-off some months ago - Baghdad says it will not send any of them back to Iran (even though it continues to look for other countries to take people in).

occasionally, browsing thru the channels late at night i come across يوميات مدينة /yomiaat madina - 'city diary', on al-sharqiya, which is a private iraqi channel broadacast apparently from dubai.

it's on at like 2AM baghdad time/after midnight GMT
you can watch it here: http://live.alsharqiya.com/

i've been meaning to recommend this programme to you lot for ages on purely aesthetic merit, it's fantastic viewing.... but there may be some political message there too ... judge for yourselves

the format is: someone gets a camera and goes for a wander for an hour or two in an iraqi city

... usually it's just one loooong shot, mooching around the market in karbala at pilgrimage time, or the park by the river full of families out at night, or the social club, or some other such public space; last night it was a shopping street in mosul,
there's interaction with people, but very little conversation and no narration, no presenter,

people seem unconcerned as the camera pans past them, getting on with their lives, not usually at all shy or evasive, but not engaging apart from to say welcome, raise a hand in greeting, before the camera driftson...

this is a totally different presentation of iraq, there's no particular evidence of war or militarisation, (are there no bins in the park because of bombs or shortage of bins?) a glimpse into 'normal' life of people, the impression is so calm and pleasant, even mesmerising (& definitely worth a watch)
perhaps that's the message?
P

Thank you Sufi
There is somewhat similar show on NHK Japanese TV that walks through cities,
this sounds like a tonic .
Cheers

this on the other hand is absolutely horrific

This 67-page report documents a wide-reaching campaign of extrajudicial executions, kidnappings, and torture of gay men that began in early 2009. The killings began in the vast Baghdad neighborhood of Sadr City, a stronghold of Moqtada al-Sadr's Mahdi Army militia, and spread to many cities across Iraq. Mahdi Army spokesmen have promoted fears about the "third sex" and the "feminization" of Iraq men, and suggested that militia action was the remedy. Some people told Human Rights Watch that Iraqi security forces have colluded and joined in the killing
Click to expand...

Via Tom Ricks, an fascinating new paper from a former major general, police chief, and mayor of Tel Afar, now working as a senior fellow at the National Defense University: 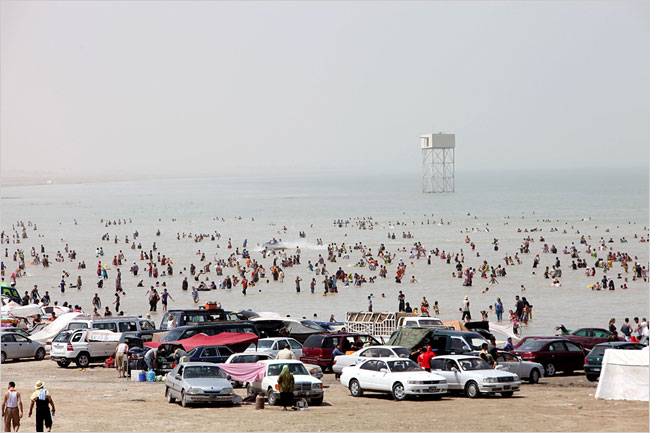 A day out at the beach, Lake Habbaniya in Anbar Province, Iraq
P

found this particularly interesting, having had a fair bit of experience myself w/milking cows.
S

found this particularly interesting, having had a fair bit of experience myself w/milking cows.
Click to expand...

Galbraith can abscond to gubernatorial ambitions in Vermont and enter a multi-million lawsuit against DNO [Norwegian oil company] in London. Around the world, there will always be takers for his simple message of ethnic decentralisation as the universal tool for solving political conflict...Accordingly, instead of taking their cues from Galbraith (who is now presumably basking in perfect “congruence” in Townshend, Vermont) both the Kurds and DNO would stand to gain a lot from adjusting their policies to the new realities in Baghdad. Above all, this would mean realising that Iraqi Shiites are not particularly interested in symmetrical federalism for Iraq. True, there are Shiite sectarians today, just like there were anti-Shiite bigots during the Baath. But the irreducible minimum on which all parties south of Kurdistan can agree (and something which an alarming number of Western analysts still just cannot seem to get their head around) is a consensus position on Iraq as a unified territorial shell. Today, the real tension in the Shiite Islamist camp is between Shiite chauvinists who pay lip service to the idea of Iraqi nationalism and Shiites who are genuine Iraqi nationalists – and not so much between centralists and separatists (even ISCI now seems to have given up its federalism ambitions, if perhaps somewhat reluctantly).
Click to expand...

Finally, in a welcome development, the editorial board of the NYT has ruled that Galbraith did indeed have a conflict of interest which should have been disclosed when he wrote op-eds in the paper in favour of the soft partition policy in Iraq. This should make it clear once and for all that there is more to this case than the primitive Norwegian “conspiracy” alleged by some Vermont newspapers, according to which the whole affair has been fabricated by all-powerful Norwegian trolls bent on revenge for the Eide/Galbraith dispute in Afghanistan.
Click to expand...

shameful to hear the galbraith accusations, but there should be a list of companies and people and pundits that are in positions to reap rewards from contracts at this point. if I'm hearing just one name im very skeptical
S

adruu said:
shameful to hear the galbraith accusations, but there should be a list of companies and people and pundits that are in positions to reap rewards from contracts at this point. if I'm hearing just one name im very skeptical
Click to expand...

i hear ya but i must be honest the only reason i posted was i'm interested in what Visser says wrt PG in general, for me the money quote up above is

But the irreducible minimum on which all parties south of Kurdistan can agree (and something which an alarming number of Western analysts still just cannot seem to get their head around) is a consensus position on Iraq as a unified territorial shell.
Click to expand...

- this is certainly a line you can associate w PG.

so just flagging up a (appropriate) dig at PG here, but, please, you have at other matters if you want - nothing to do w needing to be skeptical

Anyone else finding the Iraq Enquiry absolutely enthralling?

All the old names and accusations and back room intrigue oozing out again. It's a world I still live in, it's gripping to me.