This is as clever as it sounds - camera sees around corners thanks to femtosecond laser bursts http://bit.ly/GDA0Dr


That is so clever and such a thorough application of light theory I'm surprised it's not classified.
The inverse of this would make invisibility cloaking much more effective.

Most of the really high-precision detectors in the LHC experiments are used for tracking charged particles, so I'm not sure it's directly connected to this kind of technology - but at the end of the day it's all CCD (charge-couple devices) that form the basis of digital cameras from space telescopes to the one in your phone. And, on a fundamental level, particle physics instrumentation.

bloody hell! Tea - get writing yo! Spook Country as a jump off ;-)

It's kind of a boring/cliche subject but sometimes I wonder what stuff is going to be like when I'm like 50 (22 now). I really don't want to think about it though, grim shit, can't see the world or our relationship with technology and nature being any more healthy than it is now.

up on sum urban tech-wear tip, acronym be on dis
Z

what 6 replies and no yo-mama jokes? dissensus, and tea in particular, gettin soft IMO

The future will be hard to resist: http://www.paulgraham.com/addiction.html

Everything will taste great, look amazing and ruin your life.

swears said:
The future will be hard to resist: http://www.paulgraham.com/addiction.html

Everything will taste great, look amazing and ruin your life.
Click to expand...

As someone who's hopelessly Internet-addicted and unable to shake off the last vestiges of smoking, that made an interesting read. I like the idea, the process, he's hit on there.

swears said:
The future will be hard to resist: http://www.paulgraham.com/addiction.html

Everything will taste great, look amazing and ruin your life.
Click to expand...

Meh, people have been prophesying Doomsday one way or another since the year dot and it hasn't happened yet. And he's wrong about cigarettes: the tobacco in modern fags contains far less nicotine than the wild tobacco Native Americans smoked in their peace pipes. Street heroin is usually weaker that raw opium because of all the shit it's cut with. Distilled spirits have been around for hundreds of years but people still drink beer and wine. Computer games have been getting more sophisticated every year since they were invented but people still play chess and poker and football and tennis and cricket and so on and so on and so on.

TBH he sounds like an old fart who can't understand these young 'uns with their iFace PlayPod thingumies...

Read kind of toungue in cheek to me...:/

grizzleb said:
Read kind of toungue in cheek to me...:/
Click to expand...

You reckon? It sounded fairly earnest to me but then I'm sometimes not the best person at picking on written irony.
Z

certainly related to both thread and above article:

If there is a trend of people becoming more lonelier then I believe Facebook surely plays an interesting part in this but isn't the cause something way bigger than Facebook: individualism? Anyway, nice and interesting read. Surely recognize some of the things they mention.

Staff member
Facebook seems to me to be more about being a member of cliques, groups, fan clubs and so on than individualism per se.
Z

yyaldrin said:
If there is a trend of people becoming more lonelier then I believe Facebook surely plays an interesting part in this but isn't the cause something way bigger than Facebook: individualism? Anyway, nice and interesting read. Surely recognize some of the things they mention.
Click to expand...

yes the technology chicken came after the individualism egg... the 2 have been working superbly well over the last century or 2...

Two British men who have been totally blind for many years have had part of their vision restored after surgery to fit pioneering eye implants...When light enters the eye and reaches the chip it stimulates the pixels which sends electronic signals to the optic nerve and from there to the brain. 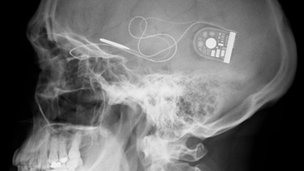 Bollocks to fancy phones, this is what technology is for.

Yeah, yeah, giving sight to the blind by implanting a ZX81 is all very laudable, but how about zapping structures inside cells using femtosecond lasers like wot they use in that round a corner camera thing

"The device is so precise that it can reportedly target individual cells or even parts of cells, such as nuclei."

Mr Tea, I would be interested in what you consider the very apogee of technological advancement currently extant. I read in i yesterday that 1 exaflop computer is being built in India that could in theory accommodate an uploaded brain, but somehow I don't think that would be sufficient to properly model, simulate or instantiate a proper, working mind.

Staff member
That's a very good question. I work in a hi-tech company but I'm a lot less into the nitty-gritty of this or that latest chip than you might think. At the risk of blowing 'my' own horn, some of the stuff 'we' (I'm not involved in actually designing or building anything, mind) do at work is pretty impressive. The mirrors in the machines we've built in the last couple of years are smooth to within about a nanometre, which means that if they were the size of Holland the biggest deviation from the designed curvature would be about a millimetre. In fairness they're made for us by Zeiss, but once they're here they have to be put together with similar tolerances. It's just nuts.

That laser scalpel is amazing, the idea that surgeons can target parts of cells, wow...

Of course the standard argument that the money that goes into developing anything like this would be better spent educating a few million women in the third world and vaccinating their kids against boring but serious diseases cannot be got away from.

Not heard about that computer, pretty impressive but I've read some fairly convincing arguments (Doug Hofstadter, Roger Penrose) as to why the brain doesn't act 'merely' as a very complex organic Turing machine and that attempts to implement anything like a brain in silicon using standard paradigms are pretty much doomed, regardless of how powerful you can make the computer. Then again, who knows what will come of quantum computing, or genetic computing, or whatever else people are working on.